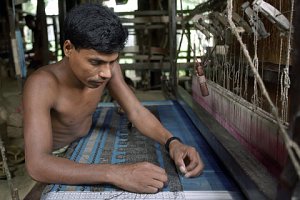 The post Rana Plaza safety accord in Bangladesh is making progress on worker safety, despite opposition from some local industry and government

The Accord on Fire and Building Safety in Bangladesh, established after the catastrophic Rana Plaza building collapse that killed more than 1,100 textile workers in April 2013, is about two years into a five-year programme of factory safety inspections.
More than 1,600 factories in Bangladesh will be covered by the programme, which is paid for by the 200 or so rich-world brands that have signed up to the accord.

At its inception, the accord was hailed as a game-changer. It is legally-binding, meaning that signatories commit to source from Bangladesh for at least the five-year duration of the accord, and agree to facilitate structural repairs to factories.

This does not necessarily mean that brands pay outright for repairs. It can mean that they help factory owners raise finance, or that they commit to increase orders to guarantee factories’ income streams.
In 2013, Christy Hoffman, deputy general secretary of the UNI Global Union, one of the accord’s negotiators, said it was “a turning point” and could “transform the way safety issues are addressed in Bangladesh”.

The experience of the last two years has to some extent borne this out, but it has also become clear that implementation of the accord is a long and winding road, with many obstacles on the way.

In particular, the powerful Bangladesh Garment Manufacturers & Exporters Association (BGMEA) is wary of the accord.

In June, the organisation’s president, Atiqul Islam, said the accord was a “big problem” because factory safety inspectors were starting to interfere in the internal management of some factories.

It’s not the first time Islam has made such comments. He has previously said that the accord imposes “huge sufferings” on factory owners, and that it undermines the competitiveness of the Bangladeshi ready-made garment sector.
BGMEA has the ear of the government. Bangladesh’s finance minister Abul Maal Abdul Muhith even characterised the accord as creating “nooses” to strangle growth in the sector.

The accord’s team reject the claims, and also say that such views represent a minority opinion. The BGMEA is vocal and close to the government and concerned that its own power should not be undermined, according to Ben Vanpeperstraete of the UNI Global Union.
On the level of individual factory owners, attitudes are different. Vanpeperstraete says that as factory owners cooperate with inspection and building improvement programmes, the accord becomes “much more concrete” for them, and they see the potential benefits from investments in worker safety – such as happier workers and better relationships with their western brand customers.
Worker welfare

Thiru Yovel of the Clean Clothes Campaign, which is a member of the accord steering committee, says that the accord is only helping to enforce safety standards laid down in Bangladeshi law. Factory owners are “well organised and they have a lot of power”, but the bottom line is workers must be able to “work in safer places”, he says.
Vanpeperstraete expects the accord to make more progress as factories are upgraded. In May, the first certifications were issued to factories that went through a remediation programme, an achievement in which all involved – the accord, workers, owners and western brands – can bask.

To secure further progress, brands should be prepared to redouble their efforts and tackle criticism aimed at the accord.