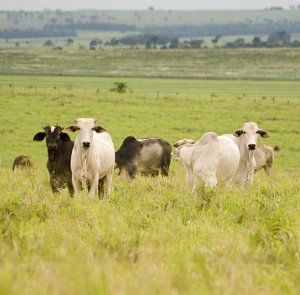 The impact of the beef industry on forests is massive, yet companies don’t seem to be doing much about it

One of the most interesting findings of a new report from the Union of Concerned Scientists on beef production is that there are no stand-out leaders when it comes to making sure the sector isn’t contributing to deforestation.
Its new scorecard looked at 13 of the biggest global fast food, retail and food manufacturing companies that have a footprint in the US and source their beef from South America. By evaluating the deforestation policies and practices of the group of businesses – against various criteria, such as whether each had deforestation-free purchasing commitments or adequate transparency about how those commitments are being implemented – each was given a score.

Despite the latest science showing beef production is responsible for more than twice as much deforestation as the other top drivers of tropical deforestation – such as soy, palm oil and wood products – combined, UCS finds that even those achieving the best scores are failing to protect tropical forests from being converted to pasture for cattle.
Wal-Mart, McDonalds, and Mars, the companies that came out on top, fall well short of a “strong” rating, scoring just 52, 48 and 37 out of 100 respectively.
Too much Amazon-focus
It seems that a major failure is how companies are all too focused on the Brazilian Amazon, with no attention given to other important biomes, such as the Cerrado and Gran Chaco.

More surprising is the fact Nestlé – thought have done plenty of work to implement no-deforestation measures – is languishing in the middle of the pack.

“Even those companies that are making the most progress still have big loopholes in their policies,” says Lael Goodman, an analyst with the Tropical Forest and Climate Initiative at UCS. Nestlé in particular does have a strong policy, Goodman argues, but says that they haven’t made much progress implementing it. The company “must go much further so its actions on the ground reflect its words on paper”.

UCS accepts that the world is moving into a new era with beef, and Goodman admits there are some challenges that as yet don’t have easy solutions. Unlike crops, cattle move around and companies and their suppliers often only have documentation for the last ranch that held the cattle immediately before slaughter – and only check this final ranch for deforestation impacts.

None of the 13 companies mentioned in the report have responded directly yet. The McDonald’s official company line is that it is “committed to reporting progress regularly and transparently” and bases its approach to beef on WWF’s risk analysis to prioritise Brazil, Paraguay, Argentina, Australia and other regions identified as “high risk”.
Clearly, there are supply risks for brands that are not dealing with beef-related deforestation – as well as attracting attention from campaign groups such as UCS.
Lip service?
Moreover, membership of beef sustainability roundtables is, UCS says, in some cases merely paying lip service to dealing with the issue and not going far enough. Burger King has been singled out by the organisation for making no commitment to ensure its beef meets any kind of environmental standards, or acknowledging that its beef purchasing practices may pose a risk to tropical forests. And this is despite being a member of two different sustainability roundtables looking at the subject.

While palm oil has been the commodity with the most activist focus, campaigners are switching attention and looking for corporate action on other products with deforestation impact. Brands will need to do more than make warm noises about their beef-buying not contributing to deforestation. As Goodman says: “By not dealing properly with this issue, companies risk losing customers, as well as a reduced supply of beef and higher costs.