Can brands be blamed for endemic development problems? 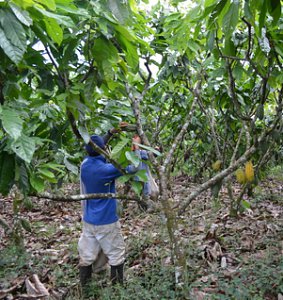 A commodity in demand

While companies say they are addressing the cocoa supply chain’s big challenges, real institutional change requires all stakeholders to collaborate

Another day, another campaign targeting big business – now it’s been the turn of the chocolate sector and the significant social and environmental challenges in the cocoa supply chain.

Mighty Earth’s new report, Chocolate’s Dark Secret, says that 90% of protected national parks in Ivory Coast – the world’s largest cocoa-producing country – have been wiped out for the purposes of growing cocoa, and the same is happening in Ghana. The report says that this has, for example, driven chimpanzee populations down to “just a few small pockets” and significantly affected the remaining wild elephant herds.

And Mighty Earth’s clear assertion is that the blame lies with the big chocolate companies that have been “knowingly buying cocoa from inside national parks and protected forests for years, and putting it into products like Cadbury Dairy Milk and Mars Bars,” as Mighty Earth CEO Glenn Hurowitz puts it. He says that companies have been able to “get away with it because for some reason there hasn’t been real scrutiny of the chocolate industry’s contribution to deforestation”.

It is, however, a charge to which many of the biggest chocolate companies have been quick to respond. Mondelēz, for example, confidently points to its Cocoa Life programme, launched in 2012, as evidence that dealing with deforestation in its supply chain has been on its radar for years now.

“Through Cocoa Life we are mapping our farms, working with tech platforms such as Global Forest Watch to active monitor our supply base transparently, and working with partners and governments,” says Jonathan Horrell, director of global sustainability at Mondelēz International. Its partnership with the UN Development Programme, for example, resulted in the planting of 800,000 shade trees in Ghana to help address the impact of tree cover loss. The business is also working with suppliers and the communities in which they sit to help farmers be more resilient.
Currently, 21% of Mondelēz cocoa is sourced “sustainably” (either using certification as a gauge or the Cocoa Life programme’s requirements). The long-term goal is to reach 100%. “We are scaling up rapidly and we have so far reached 92,000 farmers in 861 communities,” Horrell adds. The company’s ambition is to engage with 200,000 farmers by 2022.

Others continue to make progress too, including Mars whose revised science-based sustainability goals were launched recently. Nestlé says deforestation is one of the most serious environmental challenges facing the world and has pledged to make sure none of its products are connected to it.

So it does look like the private sector is moving to address many of Mighty’s concerns. A further example: the World Cocoa Foundation’s Cocoa and Forest Initiative suggests real interest in dealing with tree loss along the supply chain, and a recognition that it is a sector-wide issue.

Through this initiative 35 companies across cocoa are signed up to work together to map out a plan of action, focusing on restrictions on production and sourcing of cocoa in forest areas, the restoration of degraded forests, boosting agricultural productivity in environmentally suitable areas, and improving the monitoring of the origin of cocoa production at the farm level.

Collaboration does seem to be best solution. Political economist Peter Davis, an expert on west African development, says: “It is far too simplistic to blame big business for the issues in their supply chains.

“The main challenge is that growing these commodities requires access to land, and land is a political, and highly valuable, bargaining chip in these countries. Companies are therefore not ‘to blame’ for these challenges: for the most part issues like deforestation are as likely to be the result of a local power-broker trying to make a fast buck as they are about poor corporate governance.”

Hurowitz, however, fears that chocolate companies fail to see the urgency of real action and just “try to do another PR stunt”. He argues that it is the job of big business to find alternatives for illegal settlers who have invaded national parks, for example.
Taking responsibility
Of course, while big business may not be the root cause of social or environmental issues, a demand for cocoa can exacerbate and escalate the problems. But there is evidence that companies are taking responsibility to tackle these challenges.
Davis wants to see better engagement from producer country governments and the international donor communities. “It is not, for example, for chocolate companies or traders to address the [national] governance challenges in the countries where they operate,” he says.

“Companies need a counterpart; on their own, they do not have the legitimacy to affect societal change,” he argues. “But were a programme like Mondelēz’s Cocoa Life really able to embed with a [UK] Department for International Development or an International Finance Corporation programme, now that would be interesting.”