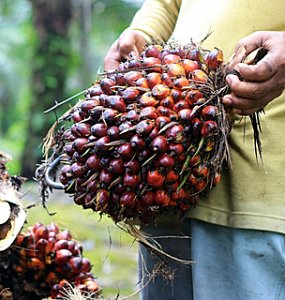 As the Indonesian government and big palm oil companies debate deforestation pledges, smallholder farmers can get caught in the middle

Government ministers and officials in Indonesia have recently been queuing up to take a pop at IPOP – the Indonesia Palm Oil Pledge.
The government has asked the big palm oil companies that are IPOP signatories to step back from their no-deforestation pledges, in particular because of concerns that smallholder farmers will be unable to comply with IPOP sustainability standards and will be marginalised.

For example, Gamal Nasir, director general of estate crops at Indonesia’s agriculture ministry, said in mid-February that IPOP favoured foreign multinationals, and would “torment” Indonesian smallholders. IPOP should be broken up “if necessary”.
But the government’s anti-IPOP invective seems to be falling on deaf ears. On 17 February, IPOP announced it had recruited a sixth major palm oil company, Indonesia’s Astra Agro Lestari.
IPOP’s membership of multinationals now covers in excess of 60% of Indonesia’s palm oil output. Alongside Astra Agro Lestari, the other members are Asian Agri, Cargill, Golden Agri-Resources, Musim Mas and Wilmar.
Strong commitments
IPOP signatories commit to palm oil that is deforestation-free, that is not derived from plantations on peatland and that promotes social inclusion. They are making strong progress – such as the palm oil supply chain map just completed by Golden-Agri Resources.
The decision of Astra Agro Lestari to join the group is seen as particularly significant because the company’s director Joko Supriyono is also chair of industry body the Indonesian Palm Oil Association, which could be a major player in the fight for greater sustainability in the sector.

But does the Indonesian government have a legitimate concern that IPOP damages the interests of smallholders? The government’s complaints seem to boil down to opposition to the IPOP no-deforestation stance, which could in principle stop farmers clearing areas of forest to plant oil palm.

There are suspicions that the government could be using smallholders as a smokescreen. It is mainly larger companies that benefit from clearing the forest for plantation. Smallholders, with their limited resources, make far less of an impact.

A 2013 study found that smallholders caused less than 11% of the deforestation in Sumatra from 2000-2010, while large private enterprises and state-owned concerns caused the rest.

The smallholders themselves are pro rather than anti IPOP. Indonesian Oil Palm Smallholders Union chair Mansuetus Darto has said that “the real focus should be on how to increase productivity instead of expanding the plantations”.
According to IPOP, about 42% of the palm oil area in Indonesia is in the hands of smallholders, but they produce only about 35% of the country’s crude palm oil – suggesting significant scope for improving yields from the same land area.

Darto has also said that IPOP could boost smallholders because palm oil companies “won’t expand their areas and this means they will instead increase cooperation with farmers to increase productivity”.
In addition, palm oil smallholders are often not independent, but participate in government schemes in which private companies clear land for oil palms and must provide a portion of the land to local communities.

Critics say this can disadvantage smallholders, who must wait for the development of the plantation before they start to make money, and who can end up with obligations to pay the private companies for seeds and fertiliser.
All in all, the Indonesian government’s professed concern for smallholders seems overblown. Anja Lillegraven of the Rainforest Foundation Norway, says that although “it is sometimes argued that IPOP is bad for smallholders”, the farmers really “stand to lose if the rainforest is destroyed”.