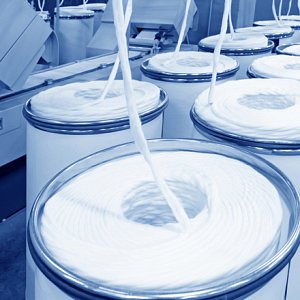 Despite dramatic fluctuations in cotton prices, organic and other more-sustainable cotton have good prospects for capturing an ever-greater share of the world market.

Since a peak in spring 2011, the cotton price measured by the Cotlook A-index has tumbled by around 70%. But the 2011 peak was an anomaly. According to the Wall Street Journal, it was the highest cotton price since the US Civil War when the Confederate states were under a blockade.
A century and a half later, the 2011 price surge was triggered by Chinese demand, concern about poor harvests and a degree of speculation. The price drop since then is, if anything, a return to normality – for most of the decade up to 2010, the cotton price was at or around the current level.

The current price is also a consequence of increased production in response to the exploding demand for cotton in 2011. As demand has subsided to more normal levels, traders have been left with very large stocks. Currently, one year’s supply is sitting in warehouses, according to the Washington DC based International Cotton Advisory Committee.

The market swings had some impact on the production of organic cotton. The Textile Exchange’s most recent organic cotton market report, published in July 2014, notes that when growers convert to organic production, some investment is needed and soils need time to regain their natural fertility, leading yields to dip temporarily.

Declining prices since 2011 have therefore been a disincentive to some farmers, and while cotton production overall has dropped by about 4%, production of organic cotton has fallen by 21%.

But in the longer term, a different picture prevails. According to ICAC figures, in the 2012-13 growing season, 26.7m tonnes of cotton were produced worldwide, of which 1.1m tonnes, or 4%, carried some form of sustainability certification, including certified organic cotton. More up-to-date data is being compiled, but the ICAC is confident that the sustainable proportion is now notably higher.

The broader trend is of growing demand for less environmentally-damaging cotton. This has been driven until now by the demand for greener goods from western consumers and the brands that serve them.
Now as China and other emerging economies seek to improve their environmental performance for their own reasons – including conserving water supplies and combating global warming – a further boost should be provided.

For example, China’s production of organic cotton in the 2012-13 growing season bucked the overall trend by rising 27% over the previous year, according to the Textile Exchange.

Corporates commit
Brand commitment remains the key. Companies are increasingly making sustainable cotton pledges. Ikea, for example, promises to use, by the end of 2015, only cotton grown according to Better Cotton Initiative standards, equivalent standards, or by growers working towards the standards.

BCI, established in 2005 and now with more than 30 retail brand members and more than 300 producer and supplier members. wants its standard to cover 30% of global cotton production by 2020.

The ICCA says that sustainability certification for growers is not onerous, and provides long-term benefits. Once price fluctuations are ironed out, sustainable growers have reason to be optimistic that they can increase their market share.