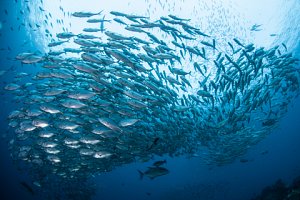 Ocean protection needs to scale up

Humanity has a depressing track record of abusing the oceans and the species within. The prioritisation of short-term profit over sustainable management has resulted in fishing communities needlessly putting themselves out of business – look no further than the collapse of the northern cod fishery off Newfoundland in the early 1990s.

The good news is that some lessons have been learned from this. There are attempts to manage fisheries more sustainably.

The Marine Stewardship Council (MSC) was founded in 1997 in the wake of the northern cod fishery collapse. There have been some successes, such as the recovery of the New Zealand hoki fishery after stock-rebuilding plans were put in place in 2006.

The bad news, however, is that broader environmental developments threaten the gains made from more sustainable approaches.

The oceans are acidifying because of absorption of carbon dioxide emitted as a result of human activities. The United States government’s Ocean Carbon and Biogeochemistry Project (OCB) says that the acidity of the oceans has increased by an “unprecedented” 30% since pre-industrial times.
And a recent paper in Science magazine paints a very gloomy picture about how a warming and acidifying ocean will reek havoc on sensitive and essential ecosystems.

This is highly problematic for many fisheries. Shell-forming creatures – including clams, oysters, mussels – are “very sensitive to changes in pH and carbonate chemistry”, the OCB says. High-acidity waters kill off the animals before they have a chance to develop.

Acidity also has effects on fish species. Exposure to high CO2 inhibits the growth of pink salmon, for example, according to one recent study in Nature magazine.

Overall, the ecological and economic effects of acidification could be severe.
Adaptation attempts
How can fisheries respond? To a certain extent, acidification can be offset by careful stewardship and by sustainable management plans. MSC certification, for example, requires fisheries to take climate change into account.

Examples of practical measures to cope with increasing acidification include the raising of young shellfish in hatchery tanks in which the water has the right pH, the use of certain marine plants that can absorb carbon dioxide and the limiting of run-off from agriculture or other activities that leads to organic carbon building up in water.

Such approaches can help to achieve some “local remediation” of high-acidity waters, according to Hawaii-based nonprofit Sustainable Fisheries Partnership, which is promoting a global ocean health programme to secure seafood against acidification.

Shellfish growers in the US Pacific northwest put such measures into place to improve their prospects in the late 2000s when they began to experience rapid die-offs of newly-hatched oysters.

But such adaptation measures can only offset some of the damage from ocean acidification. By the year 2100, ocean acidity could double according to the OCB, with some areas – such as the west coast of North America and the oceans near the poles – particularly affected because of their particular ocean currents and characteristics.
Ocean acidification will only cease to be a threat if major mitigation measures are put in place to comprehensively limit greenhouse gas emissions. A broader emission reduction strategy for the next decade and a half will of course be discussed in Paris at the end of 2015.
Seafood companies and their customers will hope that the talks lead to a strong and credible agreement. Otherwise, the former will be out of business and the latter won’t have anything to go with their chips.