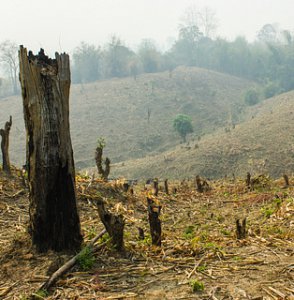 Be aware of where your money goes

The statutory risks for companies from deforestation go beyond environmental law. Investors should take note

Deforestation presents multiple risks for asset owners and managers. Supporting companies who either deforest directly or through their supply chain threaten an investor’s reputation and their bottom line. Those companies also risk legal exposure, which would have financial implications material to their investors.
Not all deforestation is illegal, but it is a vast and growing problem. Interpol estimates that illegal logging represents $50-150bn – and that illegal logging accounts for 50-90% of all forestry activities in key producer tropical forests, such as those of the Amazon basin, central Africa and southeast Asia, and 15-30% of all wood traded globally. Law enforcement agencies are increasing their response to this threat, most notably through Interpol’s Project LEAF.
Illegal trade

Developed countries enforce specific environmental laws to combat trade in illegal products, such as the European Union Timber Regulation or the US Lacey Act. These laws raise the risk that companies involved in products such as timber may be prosecutors.

The impacts can be substantial – Lumber Liquidators received a $13m penalty in 2016 for Lacey Act violations, for example.

Prosecuting authorities can therefore call on laws beyond environmental statutes to pursue forest crime – potentially targeting actors on the ground, the companies who deal with them, and even the investors who support their actions.

Broad exposure
Climate Advisers has led a project throughout 2018 examining the potential of US laws. Companies should be aware of potential exposure to a broad suite of laws, including:

For each of these laws, there are potential links to forest crime that make investigations and prosecutions possible. Climate Advisers has just released a report detailing these laws for investors. The issue is increasingly material – prosecutors are interested in pursuing forest crime and have these “generally applicable” laws at their disposal.

The implication for investors is that illegal deforestation exposes companies to more legal risk than solely environmental laws. Investigations and prosecutions cost companies resources, reputation, and time – all factors that can harm financial performance.

The increased interest in forest crime raises the stakes for those investors exposed to the land sector. In response, they should be diligent and forthright with company management to mitigate these legal risks, or reconsider their investments in companies not actively addressing these risks.

Deforestation is of growing relevance to investors. Supporting deforestation, legal or illegal, is risky for both an investor’s reputation and bottom line.

The prevalence of illegal deforestation and forest crime, and a growing response by governments to combat it, should give investors reason for caution. The legal risks could be higher than they think, and they should respond before it is too late.

Anthony Mansell is director, policy and research, at Climate Advisers.