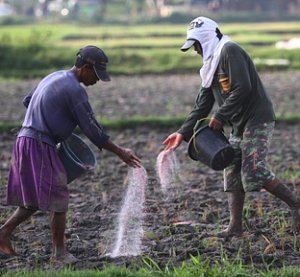 One of the biggest stories to emerge from the World Economic Forum in Davos was the promise of a new $400m fund from the Norwegian government designed to kick-start investments that will help to protect 5m hectares of forest and peatlands, an area the size of Costa Rica.

With an initial commitment of $100m from Norway, a collaborative effort involving the Global Environment Facility, the UN Environment Programme, the Sustainable Trade Initiative (IDH) and a handful of big food companies and NGOs, will drum up support and cash between now and the end of the decade.

And that money will largely be used to help smallholder farmers improve their productivity on the land they already own, thus avoiding the need to expand into virgin forest areas, of which 2.3m square kilometres was lost between 2000 and 2012.
Greenpeace forests campaigner Richard George says that Indonesia's peatlands should be a high priority, given that their destruction is a major source of greenhouse gas emissions. He argues for using some of the funds "to identify and protect the peatlands most at risk of development is a no brainer".
Supply security
It is an approach already being adopted separately by big food companies, such as Nestlé and Cargill, to protect their long-term commodity supply. Following on the work of the Tropical Forest Alliance 2020 – which has been fostering global public-private partnership to scale-up action when it comes to creating deforestation-free supply chains – this latest fund provides a scalable incentive to tropical forest governments to make sure investments are made in the jurisdictions that protect forests and reduce the related greenhouse gas emissions.
As part of the 2015 Paris climate agreement, Brazil is committed to restore 12m hectares of forest and 20m hectares of “sustainable intensification” of agriculture. The new fund will help to “develop scalable models to achieve that”, according to Roberto Jaguaribe, president of the Brazilian Trade and Investment Promotion Agency.
Keeping up the pace, Unilever – incidentally, the first corporate investor in the Norway fund, pledging some $25m over the next five years – also says it has made a step towards systemic change on sustainable palm oil sourcing with a ‘produce and protect’ strategy.

Yields boost
Developing a jurisdictional approach, the consumer goods giant has signed a three-year memorandum of understanding with provincial and central governments in Indonesia. This will see more effort to source at a village level, building stronger relationships on-the-ground to improve the yields of farmers in exchange for their support in the fight against deforestation.

The ability to use finance at a local level to scale up action is seen by a growing number of experts as a step change. Efforts to save the world’s forests hinge on securing private sector funds and making sure indigenous communities are more involved in how their local biodiversity is being protected.

However, for such collaborative action to truly scale up to have the necessary impact, many more players that impact on the world’s forests will have to put their money in. While Carrefour, Marks & Spencer, Mars, Metro, Nestlé and Unilever have all publicly stated their support for the Norwegian fund, only the latter has so far invested.

Richard Donovan, a senior vice-president and vice-president for forestry with the Rainforest Alliance, wants to see more companies encourage a bottom-up approach to dealing with the issue. He argues that while top-down efforts are important in terms of policy development and meeting commitments, “we have learned that building from a base of action at the local level – with committed leaders in government, companies and civil society – is critical”.

He points out that there has been a lot of work done over the past ten years to identify opportunities to enhance sustainable production on degraded or already cleared lands rather than clearing more forest – the opportunities are clearly there. Now, he says, “companies need to come up with and begin actual implementation of ‘investable’ or ‘bankable’ projects with clearly defined targets”.

Deforestation: is there too much focus on palm oil?

Announcements at COP26 have refocused attention on to the need for companies to transparently and...