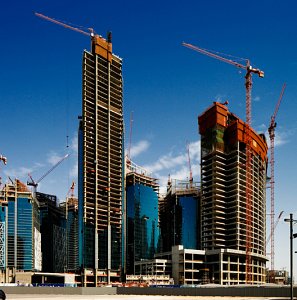 Qatar's construction at a heavy cost

We ask who is being targeted by whom – and why

Do Fifa sponsors deserve a red card?
Poor working conditions for construction workers building football World Cup facilities in Qatar have been well documented. But, what to do about it? Target those with close commercial links with world football governing body Fifa? Is this the only approach?
In fact, World Cup sponsors – paying millions for the privilege – have protested that their level of influence to affect working conditions at the 2022 World Cup building sites in Qatar has been over-stated.

They might have a point, but that hasn’t stopped campaign groups – backed by a general public generally bemused by the internal workings of football’s world governing body – targeting the commercial supporters for perceivably sitting back and doing nothing while hundreds of construction workers have either died or suffered injuries due to unsafe working practices in Qatar.

The International Trade Union Confederation (ITUC) has led calls for sponsors – including Coca-Cola, Adidas, Visa, McDonald’s, Gazprom and Budweiser – to exert their financial muscle by threatening to pull out of the tournament if world football governing body Fifa does not take action to enforce better working conditions for builders, described by the ITUC as “simply slavery”.

Letters sent to eight of the biggest sponsors prompted a series of media statements, with Coca-Cola calling for Fifa to establish an independent commission to help make the necessary reforms and “build back the trust it has lost”.
Elsewhere, a set of much-shared “anti-logos”, collated by Bored Panda, take aim at the sponsors by reimagining their brands and mission statements with Qatar in mind. One Reddit user that created an alternative Coca-Cola logo with the curved white logo forming two handcuffed arms, wrote: “Coke’s slogan is ‘Share Happiness’, so I made an ad to remind them of the kind of happiness they’re sharing in Qatar”.

Conflict minerals in the electronics sector

Spurred by the conflict minerals provision in the Dodd-Frank Wall Street Reform and Consumer Protection Act, and growing consumer interest, a spotlight continues to be shone on the electronics sector.

Now, a complementary campaign from the group, the Conflict-Free Campus Initiative, aims to tap into the perceived power of student activism – and its reach and influence across social media – to continue to raise the profile of what is happening in the Democratic Republic of Congo (DRC), and what corporates might do to effect positive change.
Initially, the campaign focused on encouraging university decision-makers to shift their procurement practices in favour of the electronics companies that had the best record on conflict-free minerals. But it has since targeted city officials to enact new policies on purchasing contracts to ensure that new cellular or telecoms devices are “conflict-free”. Portland, Oregon is the latest city convinced by the initiative to adopt a new procurement policy, following in the footsteps of five other cities, and two US states.

While Raise Hope for Congo applauds the majority of electronics companies for improving their traceability, auditing and certification of their suppliers, it is urging companies to make sure that conflict free does not mean “Congo-free” as they instruct suppliers to boycott DRC altogether, leaving mining communities behind.

After two years of campaigning by trade unions, companies, multistakeholder initiatives and NGOs, victims of the 2013 Rana Plaza building collapse will benefit from $30m in compensation. Among the NGOs that worked tirelessly to ensure that apparel brands and retailers whose clothes were produced at the factory paid proper compensation to the injured survivors and families of those that died was the International Labor Rights Forum.
But the NGO is not resting on its laurels and workers’ conditions within companies at the end of large corporate supply chains is still very much on the radar.
Most recently, the “biggest and baddest” as the ILRF describes them – McDonald’s and Wal-Mart – have been dragged over the coals via two new reports claiming to uncover how the two companies are failing to protect workers along their supply chains, despite their power to influence best practice.
One report tells the story of workers at Taylor Farms – a supplier to McDonald’s – who called on the fast food giant to intervene when their employer was said to be violating a number of provisions set out in the McDonald’s supplier code of conduct, not least suppressing the right to freedom of association. They claim that, rather than helping them out, the burger chain failed to use its leverage and pulled its orders after carrying out a secretive factory audit – a story widely picked up by the media, including the Huffington Post.
The other report, developed in partnership with the Food Chain Workers Alliance, looks at the labour conditions of those working within Wal-Mart’s food supply chain. It claims the retail giant has “routinely violated” its own code of ethics on labour standards – accusations Wal-Mart has yet to respond to.

Both reports demonstrate, of course, that whatever good work big companies may be doing in some areas, the activist community will keep a close eye on what’s going on throughout their supply chains, and highlight what they may regard as poor practice wherever they see it.
Child labour under ground – mining and construction

The recent World Day Against Child Labour presented the perfect excuse to focus on the all-too prevalent practice of child labour, defined by the International Labour Organisation (ILO) as work that “deprives children of their childhood, their potential and their dignity, and that is harmful to physical and mental development”.

The ILO used the occasion to explode some of the myths surrounding child labour, including the assumption that it most often occurs in factories and so-called sweatshops. According to its own estimates, 58% of child labourers aged between five and 17 actually work in agriculture, while 7.2% work in the industrial sector, including mining, manufacturing and construction.

Meanwhile, Human Rights Watch (HRW) has been targeting the international gold refiners that source gold from Ghana. In a new report – Precious Metal, Cheap Labor: Child Labor and Corporate Responsibility in Ghana’s Artisanal Gold Mines – the NGO explores the use of child labour in the country’s artisanal, or unlicensed, gold mines, where 15 to 17 year olds pull the gold ore out of shafts, carry and crush loads of ore, and process it with toxic mercury.
Crucially, the organisation calls into question the due diligence being carried out by some of the leading refiners, such as Metalor, Kaloti Jewellery International, Emirates Gold and Kundan – pointing to a lack of control over their supply chain and a failure to report publicly on what measures they have in place to effectively monitor instances of child labour.
“These companies should exert control over their whole supply chain to make sure they’re not benefiting from child labour,” according to HRW’s Juliane Kippenberg.