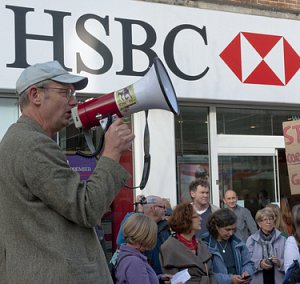 Have activists had an impact?

No doubt spurred on by recent campaigning, HSBC’s calling out of Noble Plantations demonstrates the leverage financial institutions can have in the deforestation debate

Noble Plantations, one of the world’s biggest palm oil players, is in trouble. A turbulent 2017 has seen shares in parent Noble Group fall 97% since its 2014 highs, and it has wracked up more than $2bn in debt that must be paid next year, according to Bloomberg.
And now the plantations business is being investigated by the Roundtable on Sustainable Palm Oil (RSPO), which will look into allegations that the company is preparing to clear thousands of hectares of rainforest in Indonesia to expand its oil palm production operations, despite having policies in place to do no such thing.
The move was triggered by the ongoing efforts of Greenpeace and the Environmental Investigation Agency to uncover potential breaches of environmental protection policy and produce evidence of malpractice.

But the interesting thing about this story is that it was the banking giant HSBC, armed with NGO-produced evidence, that contacted RSPO to force an investigation into the activities of Noble, which is one of its customers.
As a result, Noble has been asked by RSPO to stop work until the investigation is finished. According to Greenpeace, ABN Amro, ING and Rabobank – all armed with the same evidence – “refused to raise a complaint with RSPO to challenge Noble’s plans”.
So, HSBC has been applauded in many circles for taking such a stance. But did it have a choice?

In March, the bank was the target of NGO campaigning encouraging thousands of people to demand it stop financing deforestation. The Greenpeace Dirty Bankers report claimed HSBC had lent more than $16bn to a number of palm oil companies said to be responsible for mass forest clearance.
That stimulated the creation of a new policy for deforestation-free palm oil financing from the bank and, presumably, a renewed wariness that similar future attacks could further damage its reputation.
The NGO community has long called on the financial sector to be more assertive when it comes to the negative social and environmental impact of clients. And, according to Jamie Wooley, a forest campaigner with Greenpeace UK, banks are slowly waking up to the fact that they need to do much more in taking their responsibilities seriously. “It’s not enough to have good policies on paper that don’t translate into firm action, and the faster banks like HSBC act on their promises, the more of Indonesia’s forests can be saved from the bulldozers,” he says.
Noble’s bending of its own rules demonstrates the limitations of corporate policies – as well as the role of organisations such as RSPO, which banks rely upon to reduce their exposure to destructive palm oil companies – in deterring deforestation. The story also points to an ongoing need for banks to be bolder in holding customers to account.
More innovation

That appears to be happening, with the likes of BNP Paribas recently publishing a renewed version of its ‘no-deforestation’ funding policy.

Clearly there is room for further innovation, as recent research from Fern, highlighting the significant role played by EU-based banks and investors in continued land grabs and deforestation, suggests.

Join us in Jakarta and London this autumn to debate what business has to do about deforestation and why.