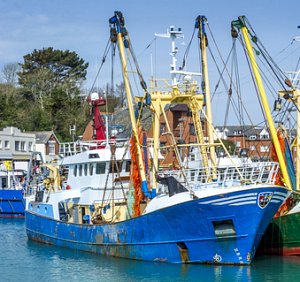 As the US adopts new measures to curb illegal fishing, campaigners hint that international regulation might just be helping, for once

While regulation frequently gets in the way of progress, there’s a chance that it might just help the fight to combat illegal seafood become a sustainability success story.
Illegal, unreported or unregulated fishing (IUU) could be worth up to $23.5bn annually, according to the United States National Oceanic and Atmospheric Administration. It could represent as much as 40% of the catch in some fisheries – though no one really knows the scale of IUU.

But measures to deny a market to purveyors of illegal catches appear to be making inroads into the problem.

Most recently, the US adopted an anti-IUU law that will implement the snappily titled United Nations Agreement on Port State Measures to Prevent, Deter and Eliminate IUU (PSMA). The agreement obliges signatories to tighten up their controls on fish catches entering their territory, and in effect creates a certified network of ports that are considered to have effective checks against IUU.
More-secure supply
For companies, the PSMA in effect creates a white list of trustworthy ports from which to buy fish – with the implication that other ports are not trustworthy. Companies could face reputational risks if they step outside the safe-port network, while non-PSMA ports stand to lose business.
The US was the fourteenth jurisdiction to sign up to the PSMA, which will become legally binding when ratified by 25 countries. Other ratifiers include Australia, Chile and the European Union. The US secretary of state, John Kerry, says the agreement would “make it harder and more expensive for criminals to evade the rules by reducing the number of ports worldwide where IUU fishing products can be landed”.

Campaigners say that measures such as PSMA do work – IUU fishing will only continue as long as there is a market for illegally caught fish. Importantly, beyond ensuring the sustainability of legal fishing activities, tackling IUU is also needed in order to combat other serious related illegal activities, such as people trafficking, and to safeguard workers rights.

Nick Kightley, a food and farming expert with the Ethical Trading Initiative, says that much IUU is organised, and those involved “know exactly what they’re doing.”

Workers on vessels involved in illegal fishing are vulnerable to exploitation. Making workers aware of their rights and demonstrating that they would be better off pursuing legitimate activities – if they are able to escape, of course, as forced labour is also a concern – is another part of the solution to IUU, Kightley says.

Other measures to cut off market access for IUU fish include the EU’s IUU Regulation, under which yellow and red cards can be issued to states that turn a blind eye to illegal fishing. Cambodia, Guinea and Sri Lanka are presently blacklisted and cannot export seafood to the EU.

Prevention focus
Kightley says the threat of blacklisting “keeps the focus and concentration” of governments and companies on preventing IUU and “helps to define what good practice looks like”.

Maria Cornax, fisheries director for Oceana, agrees. Thanks to the IUU Regulation and other similar initiatives the situation has improved substantially, she says. There is still “a long way to perfection”, but the tide seems to have turned against IUU.
Companies can help by ensuring that their purchasing practices are in line with the measures to keep illegal fish off the market. The long-term supply sustainability rationale is clear, and companies will want to avoid the reputational risk that could arise if they fail to be sufficiently diligent.