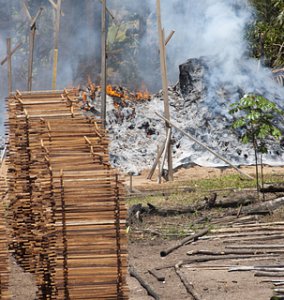 A new investigation by Greenpeace has highlighted a frequently overlooked element of the deforestation debate: the violent effects on local people.

According to the NGO, as deforestation rates have risen in the Brazilian state of Rondônia, in the western part of the Amazon rainforest, there has been a coinciding increase in the allegations of attacks on the indigenous people living there.
A victim of expanding farms, Rondônia is among one of the most-deforested parts of the Brazilian Amazon. Around 40% of the state’s forests are protected by law, not only to protect the trees themselves but also the communities that call the forest their home.
But the non-profit monitoring institute Imazon says that, short of land to go after, loggers are increasingly targeting trees in these protected areas.

Currently, people are afforded protections and rights via Brazil’s National Indigenous Foundation (Funai). However, Greenpeace says that budget cuts of 44% are compromising Funai’s capabilities to act as an effective policing unit.

There have been 64 deaths from conflicts over land and resources in 2017, compared to 61 in 2016 – 49 of which happened in the Amazon, according to Comissão Pastoral da Terra. But it appears that powerful agribusiness support in government is giving a sense of impunity to those committing the alleged attacks, says Brazil’s Indigenous Missionary Council.

The Greenpeace investigation should put business on high alert once again – that their procurement actions can have serious consequences and that brands have a responsibility to help rectify the situation, and to work to ensure illegal loggers are not lurking somewhere in supply chains.

Of course, many of the current responses to dealing with the social challenges associated with commodity supply chains are wrapped up in no-deforestation commitments. Typically these include goals for protecting local, indigenous populations.

When asked what businesses can do to respond to the situation in Rondônia, Stewart Lindsay, vice president of global corporate affairs at Bunge confirmed that the region is “covered by the Amazon soy moratorium, so the soy sector is exercising proactive governance in this area”.

Protecting against land-grabbing is a fundamental solution in the fight against deforestation, argues Danielle Morley from the Roundtable on Sustainable Palm Oil. “The debate on forests can sometimes overlook the rights of forest peoples – even in debates for zero-deforestation commitments,” she says.

But the debate must account for local people’s right to development and find a long-term solution which balances conservation with development, she adds. “Undermining indigenous peoples' rights in order to develop land for agriculture is unacceptable.”

Certification schemes like the RSPO have long-included criteria that commodities being produced under the label must have respected the rights of indigenous peoples based on the principles of free, prior and informed consent.

On-the-ground enforcement of such principles is easier said than done, though, especially in the face of local and regional governments under pressure to incentivise economic development – a familiar story – and to turn a blind eye to illegal timber extraction.

But against a backdrop of intensified campaigning on behalf of communities most vulnerable to rampant agricultural expansion, brands will need to work even harder to boost their traceability and transparency along their supply chains. The Greenpeace research shows that this issue is very much on the activist radar.