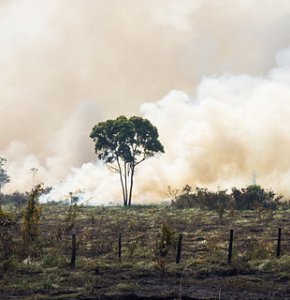 Words don't save the trees

While companies are making the right noises on deforestation, actual achievements remain off the necessary pace

The good news: there has been a dramatic increase in the number of companies promising to eradicate deforestation from their supply chains.

Nestlé made one of the first major commitments in 2010, pledging that “all of its products, globally, will not be associated with deforestation by 2020”. The Swiss food giant claimed its promise as a first in its sector.

Just a few years on, the Global Forests Report 2015 from CDP noted that, of 171 companies covered by the report, 70% had made a “no deforestation” commitment. And in the food and beverage processing sector, Nestlé is now far from alone, having been joined by companies such as Danone, General Mills, Kellogg and Mars.

In a new report, Forest Trends has analysed 566 companies with supply chains that depend on the big drivers of deforestation: palm oil, timber and pulp for paper, soy and cattle farming. It found that 366 companies, or 65%, had made commitments to limit deforestation.

Understanding about the risks of deforestation does seem to be percolating through companies, and those same businesses are prepared to say they will do something about it.

But both CDP and Forest Trends find that actions are still lagging behind the words. So far, there is a significant lack of “commitments that count”, in the words of the Forest Trends report. Transparency in corporate actions and achievements – and even what it actually means in practice – is another concern for forest watchers.
Mind the gap

That said, and frustratingly, in many ways the gaps between promises and what needs to be done on the ground, and how they can be closed, are becoming better understood.

For example, Forest Trends notes that sustainability certification schemes are a useful “first step for many companies toward sustainable supply chains” and are included in many ‘no deforestation’ pledges. But such schemes remain patchy, and come up against the increasingly vocal debate on whether certification can really achieve the meaningful change that’s required.

Intensifying work on such standards could therefore be a great help to companies and could significantly boost sustainability.

Other areas where more could be done include common disclosures and greater transparency so progress against targets can be more easily tracked, and so that companies are encouraged to put firmer targets in place. And more use can be made of technology, such as satellite tracking, to assess the real impact of deforestation and to uncover where the real problems are.

While behaviour currently lags commitments, the efforts being made by companies should not be underestimated. Mark Gregory, finance and trade campaigner at forest NGO Fern, says there is a “momentum that needs to be developed” and a “ferment of activity” among companies and their partners to develop more sustainable systems and practices for better forest management.

Deep in the chain

“A lot has been achieved”, but the “real area where things have to change” is in the lower tiers of the supply chain in countries at risk of deforestation, such as Indonesia, Gregory says.

So while big brands and their top tier suppliers might be able to show progress towards no-deforestation promises, it is still in the hard-to-reach smaller companies or smallholders, located in developing economies, where the drive for supply chain improvements and greater disclosure will need to be focused.