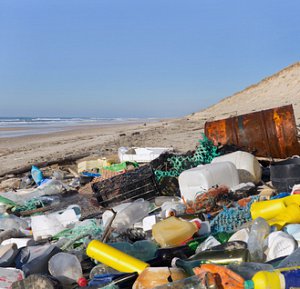 Ocean plastic waste might be the next climate change, but this time brands can’t hide

The recent footage of Henderson Island in the south Pacific released by Australian scientists won’t have failed to shock and appal even the most environmentally disinterested.

Evidence of the devastation that 38 million pieces of plastic litter, washed up on the beaches from the surrounding oceans, has had on the local environment and wildlife on the island has been widely shared across social media, evoking disbelief and anger in equal measure.
The accumulation of some 18 tonnes of plastic is thought to be the highest density of anthropogenic debris recorded anywhere in the world, with 13,000 new items washing up every day, according to the University of Tasmania’s (UTAS) institute for marine and Antarctic studies, which has been recording the situation.

The 8.6bn kg problem
Of course, the problem is huge and stretches far beyond the south Pacific. UTAS estimates that the plastic found on Henderson accounted for just two seconds’ worth of annual global production of plastic. According to Jenna Jambeck, an environmental engineer at the College of Engineering University of Georgia, 8.6bn kilograms of plastic waste ends up in our oceans every year – and this figure is well on track to double by 2025 unless something is done about it.

No doubt, the image of a crab living in the plastic lid of a bottle by beauty brand Avon – thousands of miles away from where it was originally made and sold – is one that will stick in the mind.
It is the visible, tangible nature of plastic pollution that poses a huge risk to the many businesses everywhere that are part of this story. Unlike climate change, the impact of which cannot be seen immediately or first hand, ocean plastic waste is a tangible issue that can be very easily traced back to the brands considered to be responsible. “This plastic is old, it’s brittle, it’s sharp, it’s toxic. It was really quite tragic seeing these gorgeous crabs scuttling about, living in our waste,” says Jennifer Lavers from UTAS.

According to environmental campaigner Tony Juniper, the collective response has been “nowhere near enough” as, year-on-year, the problem gets only worse. As Juniper points out, when it comes to plastic packaging only about 2% of the tens of millions of tonnes produced is recycled back into a comparable material. “About 30% of packaging is designed so that it can’t be recycled, even if it was collected. No wonder so much of this material is escaping into the sea.”

The next big campaign

Buoyed by public outcry, the NGO community is gearing up to tackle the subject like never before. The likes of Ocean Conservancy has targeted single use packaging, the “biggest source of trash” found in our oceans. As part of its annual International Coastal Cleanup event, it collected 1m plastic drinks bottles and 800,000 plastic bottle caps, to make the point.

While these campaigns encourage consumers to think about littering and general consumption habits, it is ultimately businesses that will bear the brunt of negative attention.

Juniper argues that a lot of major brands are facing serious risks to their reputations, as “packaging carrying their logos are washed up on beaches or worse extracted from the gut of a dead whale”. Companies need to “urgently cooperate” in the design of solutions and “as the risk of consumer backlash grows recognise that the opportunity for effective leadership has rapidly expanded”.
And while now there are brand reputation risks to consider, as the shock stories such as Henderson island keep coming, tighter regulation won’t be far behind.
All at sea
But the corporate response has, so far, been slow and piecemeal.

Beat the Microbead, a global campaign against the use of micro plastics in the cosmetics sector, has been backed by hundreds of brands. The US Microbead-Free Waters Act legislation will sharpen the focus further for business.

But clearly there is still so much more to be done – from supporting the improvement of recycling infrastructure and finding alternative packaging materials, to supporting collaborative sector-led efforts and NGO campaigns to clean up the environment and protect crucial ocean ecosystems.
As the reaction to the Henderson Island story shows, consumers are increasingly intolerant of plastic waste creation. The sooner businesses get a grip on the issue, the greater chance they will have of gaining public trust and minimising the risk associated with being a significant part of a huge problem. There will be real economic benefits to being ahead of the curve.