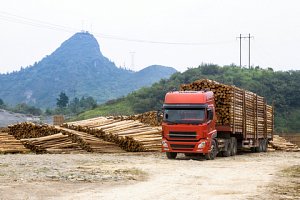 While the overall agreement remains stalled, the sign-off of the Trans-Pacific Partnership’s environment chapter is a chance to boost sustainable supply chains

Talks on the Trans-Pacific Partnership, a giant trade pact involving the United States and 11 other Pacific-rim nations, suffered a setback recently.
Meeting in Hawaii, negotiators were meant to more or less finalise TPP, but various obstacles – including New Zealand dairy exports and intellectual property protection for pharmaceuticals – meant that agreement was postponed.
Negotiators did, however, sign off on TPP’s environmental chapter. This includes basic standards that all parties must adhere to, backed up by enforcement mechanisms. Ultimately, trade sanctions could be imposed on infringers.
Enforcement challenge

Environmental protections – designed to combat, for example, deforestation and illegal fishing – in trade agreements are seen as a way of pushing poorer countries to upgrade their standards while protecting companies from countries where environmental laws are enforced.
Such provisions are especially relevant for TPP, which will be a very diverse arrangement of developed and developing economies: the participating nations are Australia, Brunei, Canada, Chile, Japan, Malaysia, Mexico, New Zealand, Peru, Singapore, the US and Vietnam, which between them represent about 40% of global GDP.
US companies are keen for a level playing field. In a letter sent in late July to US Trade Representative Michael Froman, a group of US Democrat politicians outlined the rationale for a strong environmental chapter in TPP. It is an opportunity to improve conservation of natural resources in poor countries, and was necessary for the integrity of the agreement, they argued.

If practices such as illegal fishing and logging persist in some TTP countries, it harms businesses in the US and elsewhere, which are “consistently undercut” by environmentally-damaging black markets, the politicians said.

Such environmental requirements might sound good in theory. In practice, however, it is difficult to judge if they will make a lot of difference.

Information on the precise environmental content of TPP is so far scant. A summary of the environment chapter has appeared in the US press, but the full detail will only be known when TPP is finalised and then published as part of the ratification processes in participating countries.

So far, unfortunately, it doesn’t seem as if there is much to get excited about. TPP parties would be required to enforce existing environmental treaties and laws, phase out unsustainable subsidies – for example to fishing vessels in over-fished waters – and take measures to protect threatened species.

And, perhaps jaded by experience, environmental groups are not expecting much. Leading US campaigner Sierra Club, for example, predicts that TPP will likely contain “nice-sounding language” but will be “very weak in many places”.
Sustainable lever
But TPP should create at least some leverage to press for environmental improvements. Even if all the environmental chapter does is to oblige countries to enforce existing environmental laws, it makes it just that little bit harder for companies to behave unsustainably.
For example, if an organisation such as the Sierra Club suspects that illegal timber is being imported to the US from, say, Malaysia, it can pressurise the US authorities to, in turn, pressurise the Malaysian government.

While it might be too much to expect that trade sanctions would actually be applied because of environmental infringements, for concerned organisations and companies, the environmental chapter would be an additional weapon in their armoury.