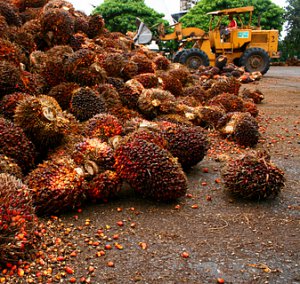 There is rarely a dull moment in the debate surrounding the ever-growing demand for palm oil, the production of which has been blamed for tropical deforestation. But there appears to have been an outbreak of pragmatism in the anti-deforestation debate.
First, the UN has published a new report calling on NGOs and conservation groups to accept that it is businesses working within the palm oil industry that are best placed to help protect and preserve forests in areas that are yet to be exploited by the industry in Africa.

Among the key recommendations laid out by the report is that certified sustainable oil palm plantations close to great ape habitats are the best chance of minimising irresponsible production.

Then, following hard on the heels of the UN report, the governments of seven key palm oil producing countries in west and central Africa – which represent 13% of the world’s tropical forests – agreed to put sustainability and transparency at the centre of palm oil production.

“Palm oil is here to stay and the hardline boycotts are unlikely to achieve success,” says Doug Cress from the Great Apes Survival Partnership. Protecting endangered species such as chimpanzees, gorillas and orangutans demands finding common ground with oil palm developers, rather than continuing to bash them over the head, is the message coming through loud and clear.

This is, of course, a big departure from the traditional view linking the palm oil sector with ecosystem destruction, particularly in the southeast Asian habitat of the orangutan. Just think, for example, of the Greenpeace campaign against Nestlé’s Kit-Kat brand in 2010.

Mondelez was the first global consumer goods company to require suppliers to track palm oil sourced from third-party suppliers as well as their own farms. It has now revised its goals to build on the fact that 90% of its palm oil is traceable to mill, and promises to stop working with suppliers who do not immediately cease deforestation in their own concessions or exclude deforestation in their third-party supply.

The company’s sustainability director, Jonathan Horrell, says there is a growing recognition that collaboration is the only way to achieve such traceability and protect forests. “Forests don’t exist in isolation – they include communities and agricultural production and, as demand for food grows, there is increasing competition for scarce land, often on the forest margin,” he says. And so, effective forest protection requires all stakeholders to be involved, including the private sector.

Initiatives such as national commodity platforms, set up with support from UN Development Programme’s Green Commodities Programme, and the Tropical Forest Alliance have been a big help in fostering collaboration between forest communities, and the public and private sectors, Horrell says.

Meanwhile, in another show of unity – and common sense – the palm oil sector and a range of NGOs have agreed on a single approach to dealing with some vital definitions related to high carbon stock landscapes, which are at the centre of discussion on tackling deforestation caused by palm oil production.

The two competing methodologies for determining HCS and setting rules for conversion of land to oil palm plantations in a sustainable manner – the High Carbon Stock Approach and HCS+ – have been working together via the HCS Convergence Working Group. This coalition of palm oil companies and NGOs has created a revised toolkit and brought about real convergence between the HCSA and HCS+ methods.

There is no coincidence that this flurry of activity coincides with the COP22 climate talks in Marrakesh – the African government agreement was actually signed at the conference. But do these significant developments point to a potentially exciting new chapter in addressing the threat of irresponsible palm oil production and sourcing?

Maybe so. Simon Lord, group chief sustainability officer at palm oil company Sime Darby, believes companies and NGOs are now rallying together in an “alliance of the willing”.

“The convergence of the HCS approach is a good example of this – something which has led to a pragmatic solution that seeks to balance no deforestation with a genuine attempt to allow economic uplift to occur in some of the poorest countries in the world.”