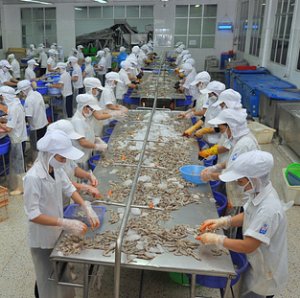 As emerging market demand for seafood increases, urgent action on regulation and cross-industry cooperation is essential, says Brendan May talking with Ian Welsh

Do you think seafood exploitation risks being the ultimate expression of the tragedy of the commons? In other words, because we effectively all collectively “own” the oceans and what they contain, no one takes real responsibility for its long-term future?

Yes there is a real danger of that. Despite some solid progress in certain markets, seafood processors and retailers worldwide are still not moving fast enough.

There are some unique challenges of course, not least that fish move! We are increasingly finding that as temperatures change, stocks are moving around.

When the Grand Banks cod fishery in the north-west Atlantic collapsed in 1992, 40,000 jobs disappeared overnight – that woke up the world to the crisis of overfishing.

Interestingly, the cod didn’t return but were replaced by other species and scientists now think that part of the reason was climate change – cod could no longer thrive in that area and when stocks were stressed by overfishing, they simply collapsed.
So would a smarter regulatory approach help?

In terms of regulation, a multi-jurisdictional approach is what’s required. That is why the EU has struggled to deal with the problem effectively. Fish were moving around and the EU was setting inappropriate quotas for different member states, repeatedly ignoring scientific advice. Politics triumphed over science, and we saw the results. .
There are more useful approaches. In Iceland and New Zealand, for example, a system of internal markets where people had to buy and sell quotas to each other were more effective in fishery management. Regulation in many western countries has improved in the last decade, but the challenge now is in emerging giants such as in southeast Asia.

Reacting in part to ineffective regulation, NGOs and campaigning groups have targeted seafood brands and their sourcing policies, with some success. How do you characterise the relationship between the seafood industry and the activists groups, and how has this been changing?
As in many sectors, there have been two broad sets of NGOs.
On the one hand we have the likes of WWF and the Marine Stewardship Council (MSC), who took the path of working with the industry from the start. On the other were activists – starting in the mid to late 1990s – that were running hard-hitting campaigns including on an intensive localised basis against particular fisheries. Greenpeace, and others, alarmed the seafood industry and there developed a sense of ‘safety in numbers’ and brands coalesced behind the movement towards certification – the MSC route.

Engagement has changed, though, and that has been helped by some fairly high-profile exposure of the challenges, not least through Charles Clover’s book End of the Line and, in the UK, Hugh Fearnley-Whittingstall’s Fish Fight television series and campaign. Companies saw what was happening to Tesco and John West, for example, and became more proactive in dealing with their seafood supply chains to avoid being the next targets.
Ultimately seafood processers and retailers are beginning to accept that they need to find sustainable sources otherwise they won’t be able to get hold of the supply they need.

Consumers expect companies to be doing these things correctly, don’t they?

Yes I think they do. But there are some surprising comparisons. For example if you want a sustainably sourced piece of fish you are better off going to McDonalds than the sort of top end exclusive restaurants that serve endangered tuna, Nobu being the most famous example. You might think that small businesses would be on top of this issue and the ‘big bad corporate’ wouldn’t, but in fact it can just as easily be the other way round.
Taking a broader view, where’s the line between ecosystem preservation and maintaining sustainable fish stocks? Are there some places where we simply shouldn’t fish at all?

We must look at ecosystems on a case-by-case basis, and some must be left alone.

Right now there are big questions about fishing in the Southern Ocean, for example, particularly around krill. Krill is a bit like ‘the new palm oil’ – it can go into all sort of food products for example. WWF and MSC have said that certain krill fisheries in the Antarctic are sustainable so then it can be no surprise that massive factory ships arrive intent on catching vast amounts of it. The worry is that a new uncontrollable rush to the Antarctic develops, risking a baseline food source for everything else that lives there.
We know that community partnerships between fishermen and conservationists can really deliver. We need to replicate that thinking on a grander scale. And yes, in many cases marine reserves or protected areas are definitely the answer, something increasingly recognised by governments.
What’s the single greatest thing that the industry needs to address to really deliver sustainable seafood?

The major challenge, as for many supply chains, is the rise of the middle classes in developing world and what that will do for demand – in this case for wild and farmed seafood.
What happens in European supermarkets is one thing, but we must address now what’s going to happen in places like China, India and southeast Asia in the next 20 years, and how are we going to service this demand sustainably. Some may turn to aquaculture, but that brings a whole new set of challenges, environmental and social. That said, in the same way that we need different types of renewable energy in the energy mix, sustainable development of aquaculture has to be part of the solution for seafood supply.

And, to sum up, what can seafood learn from other sectors to meet the challenges? Where should the industry not have to re-invent the wheel?
The first thing is the need for radical corporate decision-making. We need to ask questions like: what is the seafood equivalent of a zero deforestation pledge? At the same time we need to recognise that is not the same as saying ‘we try to source sustainably where we can’.

Secondly, we need to avoid the NGO and campaigner infighting that has become a characteristic of many environmental and social debates, as this tends to let slower companies off the hook.

Thirdly, we need to focus on what governance and regulation needs to change for sustainable seafood to be possible.
Finally, let’s not worry too much about consumers. If we wait for consumers to be fully engaged on all the issues then there won’t be any fish left.

Brendan May is chairman of Robertsbridge, a global sustainability consultancy and sponsors of Innovation Forum’s sustainable seafood conference. He was chief executive of the Marine Stewardship Council from 1999-2004.