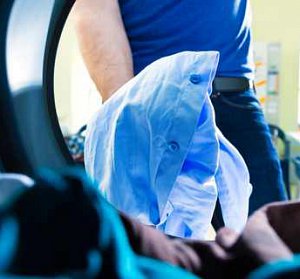 A focus point in the ocean plastic pollution debate is the tiny microfibres that are shed every time we wash synthetic clothing in our washing machines. Every load of washing potentially releases up to around 700,000 microscopic plastic fibres out into our watercourses, according to a study by Plymouth University, with the worst offender being acrylic, releasing fives times more particles per wash than polyester-cotton blends. Another study found that more than a gram of microfibres is released every time synthetic jackets are washed.

Of course, many of these particles are too small to be trapped by filters in the water network and end up being digested by our marine life and then being cycled into the human food chain.

A handful of innovators have popped up with solutions designed to help stop the microfibres being discharged. Outdoor clothing brand Patagonia sells a laundry bag called the Guppyfriend whose soft surface results in fewer fibre losses during a full wash.

Cora Ball is a multi-coloured ball that bounces around the washing machine to trap microfibres in appendages that resemble coral. Then there’s the Lint LUV-R, a special filter that can be attached to the discharge hose of a washing machine.

But sufficiently raising consumer awareness to encourage widespread take-up of such technologies is a big ask. Even then none of these solutions on their own prevents all microfibre release. Industry level solutions are required.

In the US, a recent bill put before California’s state legislature requires clothing manufacturers to include labels asking consumers to handwash anything that is made up of more than 50% polyester to stop microfibre shedding.

Even if such a law were to pass, relying on households to do the right thing is hardly the safest bet says Lucy Gilliam, co-founder of micro plastics research project, Exxpedition. “No matter how educated the consumer will get, there’s only so far they can go in their choices. We have to put responsibility onto the industry.”

Part of the response demands the use of materials that shed fewer fibres, as well as natural materials. And another part of the response is about redesigning washing machine systems so that they hold on to microfibres rather than sending them down the pipes.

But there does not appear to be much consensus as to the best solutions and where to prioritise immediate efforts. For example, as Katy Stevens, sustainability project manager for the European Outdoor Group says, the risks of microfibres are not just related to the fibres’ inability to biodegrade. “There is also a risk factor to the dyeing and finishing chemicals that are used; so natural fibres are potentially as much of a problem as synthetic fibres.”

In the meantime, brands will continue to tread water until more research has been carried out to help determine the scale of the issue, where the biggest impacts occur (whether in production or in the consumer-use phase) and what the optimum response might be.

This year, high street chain H&M is part of a project run by Swerea, a Swedish research group that specialises in material development. It aims to create a set of guidelines that will help textile producers reduce microfibres released from their products. Other brands will focus on how they might construct yarns to prevent shedding.

Partnership working, such as that being done by the Outdoor Industry Microfibre Consortium, will also be key, using the knowledge and expertise of the many to develop solutions for what is still a new and largely uncharted problem.

But as Stevens adds, “we can’t really initiate change until we fully understand the problem. Only then can we really begin to roll out meaningful solutions”.