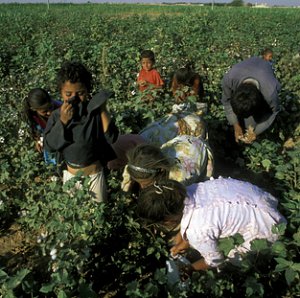 Cotton's forced labour risks are not going away

While the forced labour risks in supply chains are well known, progress to deal with them is slow

Problems that are well described and well understood are usually easier to tackle. Unfortunately, that doesn’t seem to be the case with modern slavery.
Extensive research has mapped out where modern slavery happens. In developed economies, it tends to be predominantly a behind-closed-doors issue in which individuals are forced to work against their will, for example as sex workers or in domestic servitude. Elsewhere, however, it is more structural, affects large groups of people and takes place in the supply chains that ultimately deliver goods to western markets.

The main supply chain risks are well known. The 2016 Global Slavery Index compiled by the Walk Free Foundation notes that among the countries with the greatest prevalence of slavery are Uzbekistan, where people are still forced to work harvesting cotton, and India and Pakistan, where bonded labourers toil in agriculture, brick making and textiles. In countries such as Cambodia and Thailand, forced labour is used in the fishing industry and in factories.

Knowing where the problems are in supply chains should be the basis of targeted action to resolve them. But, if anything, modern slavery is getting worse. The Global Slavery Index calculates a 28% increase in 2016 over previous estimates of the number of modern slaves – to a total of 45.8 million.

Some countries where there are known problems seem to enjoy a degree of impunity. In Uzbekistan and neighbouring Turkmenistan, the use of forced labour in the cotton harvest continues unabated. Thousands of workers, including public sector employees such as teachers, doctors and nurses, are forced by the government to work long hours picking the Uzbek harvest under threat of penalties, including loss of their jobs. The authorities are also accused of widespread harassment of civil society groups working to highlight the labour abuses.

And so, unsurprisingly, the US government Trafficking in Persons Report 2016, downgraded both Uzbekistan and Turkmeistan to tier 3 – the lowest ranking, signalling the countries with the worst records on forced labour.

Neil Howard, a researcher into forced labour with the European University Institute, says that the basic problem is that “we have a global system of production and trade but we do not have global regulation” to protect workers. Even countries where there are known problems, such as Uzbekistan and Turkmenistan, are able to take part in the trade system – they are respectively the world’s fifth and seventh biggest cotton exporters.

The complexity of global supply chains facilitates modern slavery. Uzbek cotton might make its way to spinning mills that mix cotton from different sources, making traceability very difficult. The tools used by big brands to check this, such as audits and codes of conduct just don’t work, Howard argues. The pressures on suppliers to keep costs low or deliver at short notice also mitigate against transparency and traceability.

Nevertheless, under the 2011 United Nations Guiding Principles on Business and Human Rights, formulated by John Ruggie, companies have an obligation to undertake due diligence on their supply chains to ensure that human rights are respected. In the UK, the due diligence principle has been given legal effect by the Modern Slavery Act.

As companies get to grips with their Ruggie obligations and map the risks in their supply chains they might reassess how those supply chains are structured. Broadly speaking, the more complex and longer a supply chain, the less transparent it is.

Ruggie implementation could be a game-changer, and a new ILO standard could also contribute to tackling a situation in which big western brands outsource most functions to opaque supply chains – in other words, the structure in which hidden forced labour can occur. Change will, however, “obviously be a long process,” Beirnaert says.

Of course, leading companies, including Nestlé and Unilever, have recognised that shortening supply chains is a good way to increase the transparency within them. Lessening their complexity and bringing suppliers closer to the brands brings with it greater transparency and the ability to focus on the pressing risks such as modern slavery.