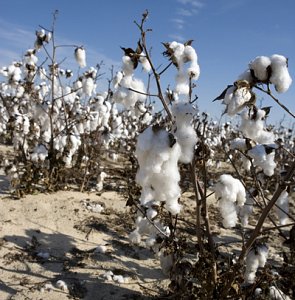 Developing a sustainable cotton supply chain is a real challenge, but there are NGOs and certification schemes that can help

Cotton has been associated with human development for centuries – perhaps for as much as 7,000 years. More recently, the trade and processing of cotton fibres helped drive industrialisation in Europe, and made the plantation owners of the emerging southern US states rich and powerful.

Throughout the history of cotton cultivation, though, there has been an undercurrent of worker exploitation, which continues. And like many cash crops, environmental damage through overuse of water resources, and chemical fertilisers and pesticides, has also been a major problem. Cotton producers vary enormously in size and scale, from vast highly industrialised facilities in more developed economies, to small scale family farmers in the developing south.

For cotton-buying businesses and brands, then, securing a sustainable supply of cotton for a myriad products – including cloth, food products such as cooking oil and animal fodder – has become a major concern.

Within agricultural systems, cotton is a key cash crop. It is the most important raw material for the textile industry, and the route from farm to finished garment involves a huge and complex supply chain of processors, traders and transporters.

Cotton expert Simon Ferrigno points out, in An Insider’s Guide to Cotton and Sustainability, that cotton is a truly global commodity, grown in around 80 countries on around 33m hectares – which is equivalent to around 2.5% of global arable land. For those that like such comparisons, this area is similar to that of Switzerland and Great Britain combined. The cotton grown each year across the globe is sufficient to make all of us 18 T-shirts each.

For many developing economies, agriculture in general provides the most effective route for economic advancement – and a starting point for wider growth. Occupying 40% of the planet’s land area and taking up 70% of freshwater resources, clearly agriculture is critical.

Up to 100 million farmers grow cotton, and there are 250 million more workers in the wider cotton processing industry.

Around 90% of the 100 million cotton farmers are in developing countries and grow the crop on less than two hectares. For them, though, cotton provides a crucial link with the global economy, which can be a positive and negative thing, with all the volatility in price that this inevitably brings.
While cotton can be a difficult crop to grow successfully, with high demands on labour where mechanisation is limited, farmers want to cultivate it as it can provide cash that in turn can be invested in the food crops that are typically grown alongside the cotton, securing the viability of the farm and the farmers food supply.

Cotton does have some rather particular requirements for successful cultivation. Long frost-free periods are required – in tropical regions cotton can grow all year as a perennial plant – and plenty of sunshine. Crucially, cotton needs a minimum of 600 mm of water per year to grow successfully, whether from natural rainfall or combined with irrigation. The young plants prefer moist conditions at certain stages of the growing process, so careful crop management is important for yield.

While cotton can be relatively drought tolerant – meaning that it is grown in some semi-arid zones with irrigation – water misuse has become closely associated with cotton supply chains. The most striking example is in central Asia where the drive to increase agricultural yields, including cotton, has been blamed as a major causal factor in the poisoning of and then ultimate effective disappearance of the Aral Sea – once the fourth largest lake in the world.

Following independence, and the breakup of the Soviet Union in the early 1990s, the Uzbek government pursued a policy of expanding the country’s cotton industry, further developing a massive – if wasteful – irrigation system.

Large cotton farms were established, with huge amounts of chemical fertilisers and pesticides required to boost the depleted soils. The run-off from these fields exacerbated pollution problems, including in the Aral Sea, increasing toxicity in an increasingly saline and declining body of water.

Similar, if less dramatic, environmental impacts of cotton cultivation can be found across the planet.

In terms of social impacts, the Uzbek cotton industry has also been the subject of close, and necessary, scrutiny. Responsible Sourcing Network estimates that one million citizens are forced to work in Uzbekistan’s cotton fields each year. The government closes schools and public offices, sometimes for months at a time, effectively coercing young people, teachers and civil servants into labouring in the cotton fields to gather the harvest for very low wages.

Farmers have little freedom to manage their farms, with all aspects of the cotton production process centrally controlled. They receive low prices for their crops, which are all set by government, which then sells on the cotton on the world markets at enormous profit.
The uncovering of such poor labour practices Uzbekistan and other cotton-growing regions has in turn prompted international brands to seek to eliminate “slave cotton” from their supply chains. Traceability of supply has become vital for brand risk management – not an easy task as the international cotton sourcing system had historically bundled together fibres from around the world as it passes through the mills, traders and buyers.

As a first step, many companies have undertaken not to source from Uzbekistan and to work to force the Uzbek government to cease forced labour practices. Over 160 have signed up to Responsible Sourcing Network’s Cotton Pledge, including big international brands such as Adidas, Nike, Marks & Spencer, Ikea, Wal-Mart and Tesco.

While cotton supply chains are coming under increasing scrutiny, brands are looking to certification and verification schemes and marks to help ensure sustainability of  supply. Fairtrade and/or organic cotton has become a sought after commodity for top-end brands, that market their products to increasingly engaged consumers. Securing sufficient certified cotton of the right quality is a challenge. Double certified fairtrade and organic cotton – with both social and environmental benefits – while regarded by many in the industry as the gold standard, is unattainable on a large scale, says Simon Ferrigno (in An Insider’s Guide).
So it is niche brands such as Nudie Jeans that can source 100% organic cotton and is a member of the Fair Wear Foundation – and are using their strict supply chain standards as key selling points for their products.

Other schemes that can have impact at larger scale include Cotton made in Africa and Better Cotton.
Set up by the Aid by Trade Foundation, Cotton made in Africa works on the principle of social business – in other words aid through trade – helping to improve the live conditions for African cotton farmers. The initiative has developed a network of international buyers committed to purchasing sustainably produced cotton and using this in their products. The farmers are trained in modern, efficient growing methods, and how to use the minimum amount of pesticides. Rain fed cultivation and crop rotation is encouraged. Cotton made in Africa works in close cooperation with organic cotton organisations, to increase the sales of sustainably grown cotton.

Better Cotton was established by the Better Cotton Initiative in 2009, and seeks to counter the threats to cotton supply from environmental and social risks by bringing to the mainstream cotton industry more careful chemical use, labour standards and sensitive production techniques. Brands such as H&M, Levi Strauss, Tommy Hilfiger and John Lewis are participants in the scheme, which has proved a success. In a 2013 report – The Cotton Conundrum – Forum for the Future records that in 2011, 35,000 Better Cotton farmers used 40% less pesticides and 20% less water than their conventional competitors, while at the same time increasing productivity and profits (the latter by 35%).

Cotton Connect works to link all stages of cotton supply chains, from the farmer to finished products, creating the transparency of supply that business and brands increasingly require. The organisation aims to enable retailers to transform the scale of sustainable cotton sourcing, while developing commercial success at each stage of the supply chain. High environmental and social standards are encouraged at every level. Cotton Connect works with partner brands and NGOs on many different projects, including helping them to implement Better Cotton Initiative programmes.

Genetically modified cotton was developed to help reduce the industry’s increasingly heavy use of pesticides. Most commonly, the Bacillus thuringiensis bacterium, known as Bt, is added to cotton, which then produces a natural insecticide in its tissues that is poisonous to a number of pests but harmless to other forms of life. Bt cotton is not immune to all predatory insects, but its use has cut chemical pesticide use in many cases. Any GM crop of course attracts controversy – and some studies have also concluded that Bt cotton plantations require as much chemical input as non-GM as secondary non-resistant pests have developed, and also suggested that yields of Bt cotton are disappointing.

Whatever the controversies, GM cotton has been popular, accounting for nearly 70% of all cotton by 2011/12.

Please note that this document has been updated to clarify some content regarding central Asia and Uzbekistan, and to correct some factual inaccuracies.