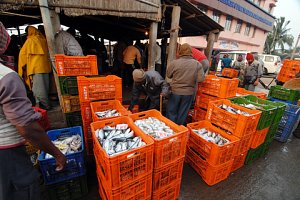 Illegal fishing is recognised as a major concern, but a lack of hard data is impairing efforts to tackle the problem

Great strides have been made in tackling the global problem of illegal, unreported and unregulated (IUU) fishing.

Laws have been put in place: the European Union, for example, requires countries that license fishing vessels to demonstrate that the fish they export to Europe has been legally caught, and issues yellow and red cards to nations where problems exist, ultimately leading to trade bans. Currently, there are bans on fish from Cambodia, Guinea and Sri Lanka.

Laws are strengthened by the availability of technology. Fishing vessels can be monitored by satellites; catches can be tagged and traced. Vessel monitoring systems, which transmit data on ship location, course and speed, allow unusual activity patterns to be spotted.

Ever lower technology costs and increased sophistication of digital tools give authorities significant firepower in the battle against IUU.

Tough regulations and the roll-out of technology are still mainly rich world phenomena. Countries with weak governance and limited capacity to acquire and use technology remain vulnerable.

But even in these countries, there have been moves in the right direction and small improvements can make a big difference. A fisheries patrol vessel donated to Sierra Leone by the Isle of Man in 2012 reportedly helped cut illegal fishing by four-fifths.

All countries, rich and poor, have an interest in eradicating IUU. Only sustainable fisheries will continue to generate employment and revenues over the long term. There is nothing to be gained from being a victim of theft, and national fisheries don't want to be blacklisted because of failure to tackle IUU.

There are also risks to countries because vessels that fish illegally can be involved in other crimes, such as drug trafficking. There are enough reasons to crack down on IUU, and therefore to hope that the problem really will be tackled.
Knowledge gap

But action to combat IUU also suffers from a basic handicap. Little is known about the scale of IUU, raising questions about the effectiveness of measures to tackle it, and if resources are being deployed to the right places.
There are variable estimates of the extent of IUU. Both the European commission and the US National Oceanic and Atmospheric Administration cite figures from a 2009 study, according to which IUU accounts for 15% of the global catch, with an annual value of $10bn to $23.5bn.
Fisheries and Oceans Canada, meanwhile, says IUU represents 30% of the global catch, but somehow calculates a lower value of $4bn to $9bn. The bottom line is that nobody knows.

Legal framework
Having a framework of laws and technology to tackle IUU is therefore a good starting point – but not enough. Those laws and technologies must be applied effectively.
This means knowing more about the extent and impact of IUU. Technology also has a major role to play in this, by providing new instruments to monitor fishing activity on a global scale and new ways to analyse the data that is generated.

It is a global effort that companies can contribute to. After all, they also want sustainable fish stocks, and therefore have a motive to contribute to the elimination of IUU.