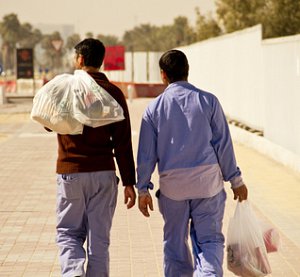 Rules should protect the vulnerable

As if it were needed, the cover story of The Atlantic’s June issue offered a stark reminder that modern slavery is very much an issue in the US. The story of how the Filipino immigrant Eudocia Pulido worked for 56 years without pay exposes a loophole – or enabler – in US legislation that overlooks those immigrant workers tied to a particular employer and fosters modern slavery.

According to US State department reports, some 17,500 people are trafficked into the US every year. According to Polaris, the anti-human-trafficking organisation, there are six different temporary visa types most commonly linked to abuses of human rights, labour and trafficking. And all six types make it difficult for immigrant workers to leave the employer or agency that sponsored their original visa application. The group says that between October 2013 and October 2014, half a million people entered on such a visa.

Meanwhile, another recent report by the Urban Institute says that many trafficking victims say that their employers threaten to report them to immigration authorities to discourage them from leaving their employment.

As more and more examples of modern slavery are unearthed, not just in the US, but around the world, have some immigration rules focused on the wrong targets? Mike McDonnell, senior manager for supply chain sustainability assessment at Intel certainly thinks so. “Much of what we learn of and hear about is geared towards protecting the other parties – the state, the employer and of course local workers. Not as much has been aimed at the more vulnerable worker who is often a foreign migrant worker,” he says.

Without even changing immigration laws, McDonnell sees a no recruitment or hiring fees approach as vital in reducing the risk of worker exploitation. He argues that without the debt bondage the recruitment fees often bring, a worker will feel more able or free to leave an exploitative work situation.

As Pulido’s story attests, there are examples of laws producing unintended consequences that help to foster modern slavery risk. For McDonnell, laws that have been (for example) designed to merely limit worker fees have “normalised” the idea that it is acceptable to charge vulnerable people for the right to gain and maintain employment.

And, other regulations, such as levies intended to protect local workers by acting as a disincentive to employers favouring foreign workers, can now sometimes be charged to the foreign workers. “That has essentially nullified the intended effect and can again lead to debt bondage,” McDonnell says.

For Anna Pienaar, global director for institutional partnerships at International Justice Mission, however, the existing, broader, legal structures, in the US and elsewhere, should be sufficient to outlaw trafficking.

She says that the reason that trafficking persists – and it persists most widely in countries with weak public justice systems – is that these laws are rarely enforced. She advocates for continual tightening and reviewing of legislation, such as the 2016 closure of a long-standing loophole in the US Tariff Act of 1930 that prohibited the importation of goods made with child, forced or prison labour unless domestic demand for such goods exceeded US production.
Regional approach?

Pienaar says that for the law to have the greatest impact, the US government should expand and standardise enforcement efforts so that orders are made to seize goods that cover regions within countries where forced labour is widespread, rather than just limiting it to the company level.

More broadly, the general push towards company transparency – and hence action – on forced labour issues, on the back of legislation in the UK and California, is only going to continue. According to the Interfaith Center on Corporate Responsibility’s latest guidance on the subject, companies will need to build better links to suppliers, ensure recruitment processes are included in the auditing process, and go beyond compliance by helping suppliers to cover recruitment costs and ensure that workers have access to grievance mechanisms.
At the same time, a more considered approach to what exactly immigration rules are designed to achieve would help prevent further examples of bonded or forced labour, in supply chains and elsewhere.