Why farmers should be paid better 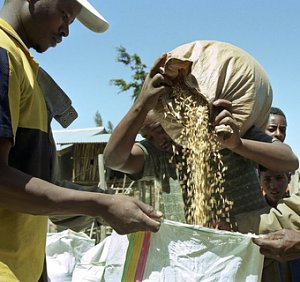 Agriculture's future not yet in the bag

The big investments made by a handful of companies to safeguard their future supply of agricultural commodities are increasingly understood as a strategic necessity. And there are a number of exciting technologies and innovations being developed in commodity supply chains. But until there is a value chain model that provides for fair incomes for all farming communities, the future of food supply remains unclear.

Women, largely occupying the lowest paid positions, remain the most vulnerable people in food supply chains. According to Oxfam, it would take a woman working in a shrimp processing plant in Thailand more than 5,000 years to make the average annual salary of a top executive at a supermarket in the US. “Our modern food system is built on squeezing women’s labour hardest of all,” says Winnie Byanyima, executive director of Oxfam International. “We know it doesn’t have to be this way.”
Farmer empowerment

Mondelēz International’s Cocoa Life programme is a great example of how a company can empower producers at the end of the chain to grow, thrive and survive. The first 100 farmers that signed up to Cocoa Life increased their incomes threefold in the space of six years – 49% more than farmers outside of the programme. Farmer training on best agricultural practices and the planting of shade trees, for example, are solid ways to boost yields and productivity – and safeguard the future of cocoa.

As the global population boom demands more and more food to be produced, a range of commodities are under pressure, constrained by complex and technical social issues. In cocoa, for example, most farms operate at a cash subsistence level because of low crop yields, low farmer incomes and poor community development. This means that young people are increasingly turning their backs on cocoa, or leaving farming altogether – something that Cocoa Life, among others, is trying to address.

Brand action
There is, inevitably, pressure on more brands to take action. However, according to Oxfam’s Behind the Price campaign, action has thus far been generally mediocre, with many retailers and FMCG companies relying on certification schemes to help elevate the importance of economic and social issues in the minds of consumers, boosting prices and the resulting incomes for farmers where possible. But with a lack of scrutiny and robustness to implementing change on the ground, such schemes have obvious limitations.

Multi-stakeholder initiatives have been useful in encouraging brands to collaborate and find solutions. The Ethical Trading Initiative, for example, brings companies and governments together to help influence public policy and give guidance on best practice based on the voice and ideas of multiple stakeholders.

But companies will continue to find it difficult to deal with the root causes of poor worker livelihoods and wellbeing if they don’t know what is happening, or where, or who is at risk. Greater supply chain transparency is a must and a small number of companies are sharing more data about their suppliers to this end.

The Real Company’s ‘single origin verified’ food systems, which shows exactly where a particular food comes from, alongside labour rights information for farm workers, provides a model of what is possible should more brands use technology to radically boost their transparency.

Walmart has trialled the use of blockchain technology – where information can be shared across a network of computers, allowing many different suppliers to add data and see information added by others – to assess its value in the pork supply chain in China. Carrefour will also use it to improve the traceability of its free-range chickens.

There are more traditional methods that could create positive social value for agricultural communities – committing to increase the proportion of ingredients sourced from women-led cooperatives, for example. The Dutch supermarket, Marqt, refuses to make large-scale purchases, preferring instead to procure locally-produced food at a ‘fair’ price from small producers.

Much of the agricultural capacity to secure the future of food will continue to lie in the hands of the millions of smallholder producers around the world. But whatever technological advances are brought into play, a sustainable food system relies on their being healthy, profitable and successful so that they can continue producing food for the long term.