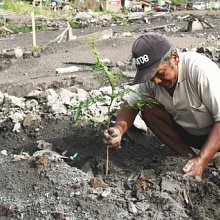 Putting back the trees

A staggering one in every five hectares of vegetated land worldwide is showing some sign of degradation and loss of productivity. The situation is being exacerbated by the impacts of the ever-increasing demands for food on top of climate change, including unpredictable weather patterns, extreme temperatures and increased water scarcity.
This is a huge concern for the 2.5 billion people globally that depend on agriculture for their livelihoods. Around 1.3 billion farmers find themselves trapped, working on ever-degrading agricultural lands demanding more chemicals and cash to give them ever-diminishing returns.
It is also a concern for the many companies in the food sector so dependent on a system that struggles to keep up with the demands of consumption. Food production accounts for 70% of all freshwater withdrawals and 80% of deforestation, according to the United Nations Convention to Combat Desertification. And the pressures on production from consumption only accelerate the rate of land use change, land degradation and deforestation.
With current farming practices accounting for 25% of global greenhouse gas emissions, and the expansion of agricultural land – particularly for beef, soy and palm oil – responsible for around 70% of deforestation in the tropics, the situation needs to change.

The restoration of land – bringing landscapes and habitats back to their natural, ecological state – alongside more-effective smart agriculture practices, offers a solution.

According to the United Nations Development Programme (UNDP), nature-based strategies such as restoration can account for more than a third of the cuts in emissions necessary to keep global temperature rises under 2C, including both mitigation and climate adaptation.
They are also both more cost-effective and durable than other approaches. For the 42 poorest African nations, the benefit of land restoration and conservation in terms of boosting farmer productivity is between three and 26 times greater than the cost of inaction.

However, despite the large apparent benefits, land restoration and carbon-positive agriculture are still being overlooked as viable solutions, receiving just 2% of climate finance. Yet the investment opportunity is clear, says UNDP, with the two billion hectares of deforested and degraded land globally now considered to be an investment asset class yielding returns of between 5% and 9%.

A number of commitments have been made, not least by the 50 governments signed up to the Bonn Challenge on Land Degradation Neutrality Framework, said to result in annual benefits of $170bn through improved crop yields, among other things. Similarly, 200 companies, governments and NGOs have endorsed the New York Declaration on Forests to restore 150m hectares by 2020; 21 nations have joined the African Forest Landscape Restoration Initiative to restore 63m hectares of land.
Africa’s great green wall

There have been some successes. Ethiopia and Liberia’s ‘great green wall’ project to restore an area the size of Kenya will help to achieve 40% of the Bonn Challenge target. Pakistan has planted one billion trees to play its part in meeting the 2030 goal for the Bonn Challenge.
Elsewhere, the likes of Coca-Cola, Heineken, Mars and Nestlé are all engaging in some form of land restoration projects, and have for some time.

At its brewery in the water-stressed region near Seville, Spain, Heineken is restoring lagoons in the local wetlands. By improving soil structure and water filtration, and re-planting native trees in areas surrounding three lagoons, the company wants to return 420,000 cubic metres of water each year to the local environment.
Meanwhile, Nestlé’s RiLeaf project in Sabah, Malaysia has seen 2,400 hectares of land along the lower Kinabatangan river reforested to provide a natural buffer to filter pollutants, soil sediments and chemical fertiliser run-off, giving the river a chance to repair itself over time and protecting valuable water resources for local palm oil producer communities.
Peatland restoration

In southeast Asia, around 20% of all palm oil plantations are on swamp-like peatland, which is drained to make the land suitable for crops. But this produces massive CO2 emissions and soil subsidence, not to mention a serious fire risk.

But given the size of the challenge to reverse the trend for land degradation, many more players, stakeholders and investors must play a part in finding ways to restore and protect hugely important ecosystems and biodiverse habitats.

Cross-sector lessons
Ruth Thomas, director of strategy and operations at the Global Agri-business Alliance, believes that the food industry could learn from the mining sector when it comes to land restoration. It is something companies in the sector have worked with regulators to do for decades once mining operations come to end. “The mining sector is mature and professional in managing these types of issues,” she says. “I hope that in five to 10 years’ time, partnerships won’t just be formed between peers within sectors, but across sectors too.”

However, private finance for projects that exacerbate deforestation, such as land clearance for agriculture, outpaces sustainable forestry by a magnitude of 140:1. And time is not on the planet’s side as land degradation and loss continues at a pace, costing the global economy up to $20tn a year in lost ecosystem goods and services.
The challenge balancing these alongside the production demands on global agriculture remain huge.
Join experts from Sime Darby, Nestlé, Cargill, Ikea, Olam, Consumer Goods Forum, Greenpeace and many more, at Innovation Forum’s sustainable landscapes conference on 6th-7th November in London. Click here for full details.