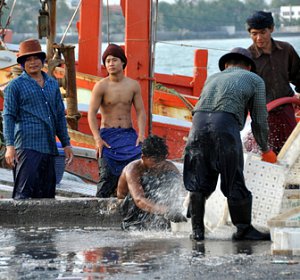 Sector on board with better working conditions

The US government has recognised improvements in tackling trafficking in Thailand’s seafood sector, but the endemic labour abuses will be tough to eradicate

In issuing its updated Trafficking in Persons (TIP) report, the US Department of State upgraded the country from a “tier 3” to “tier 2” on its watch-list of nations. The annual report ranks governments across the world on their efforts in dealing with instances of human trafficking – encouraging the opening or closing of specific supply chains for US companies, depending on national performance.

In 2014, widespread reports on human rights abuse, particularly in shipping vessels throughout Thailand, saw the country downgraded by the TIP along with the likes of Syria and North Korea. Now, it would seem, Thailand has turned things around.

A renewed tier 2 status is defined as a country that does not fully comply with the Trafficking Victims Protection Act but is making significant efforts to bring itself into compliance. This is seen as an endorsement of the commitments made by the Thai government – such as the Royal Ordinance on Fisheries and amended Anti-Human Trafficking Act – as well as the private sector in the last two years.

At Thai Union, one of the country’s biggest exporters of seafood, there has been a promise to ban transshipment at sea, the practice where boats transfer their catch to other vessels away from port, forcing workers to stay out at sea for extended periods. The company has introduced a new ethical migrant worker recruitment policy and a revised code of conduct for its suppliers. Thai Union was the target of activist campaigning about labour abuses in its supply chain in the past, but has since attracted praise for its work to improve practices in its and its suppliers’ facilities.

But has the wider Thai seafood sector made similar improvements?

Members of the Thai Frozen Food Association have promised not to use subcontractors to pre-process prawns and instead do all the work in their own factories to safeguard against trafficking and forced labour.
And there are other actions of collective action. The Multi-Stakeholder Initiative for Accountable Supply Chain of Thai Fisheries, the Shrimp Sustainable Supply Chain Taskforce, the Issara Institute and the ILO Good Labour Practices Programme are all making progress, with larger players encouraging smaller players to sign up and cooperate to find solutions to labour abuse problems.
Follow the money

The TIP upgrade will no doubt spur further action, not least for the economic benefits that can follow. In the hours that followed its release, Thai Union’s stock rose almost 1%. And days later, its ambitious acquisition spree continued with the purchase of Canadian lobster processing business Les Pecheries de Chez Nous.

The easing tension over labour issues and improved customer confidence is likely to see Thai fishing exports grow by 3% in 2016, according to the Thai Fishery Producers Coalition. If anybody needed convincing: dealing with social injustice is good for business, and here is the proof.

However, while there is progress and an apparent desire now on the part of companies to deal with labour abuses in their supply chains, there is no quick fix to dealing with Thailand’s long-standing problem of trafficking. While the movement is in the right direction, it is still an improving picture. As such, not everybody agrees with the TIP decision or its timing. Steve Trent, executive director of the Environmental Justice Foundation, described the upgrade as “the wrong decision at the wrong time”, for example.

A cultural problem
And as Nick Kightley, the Ethical Trading Initiative’s lead on food and farming, points out, while a handful of companies are making improvements to employment practices, “there is a continuing culture among other Thai companies of poor treatment of workers and the failure to recognise workers’ rights”.
What’s clear though is that the work of local multi-stakeholder groups, and leadership from the likes of Thai Union, to deal with the continuation or recurrence of abuse, at the necessary scale, will be what goes a long way towards ensuring if Thailand can maintain its tier 2 status. Even more welcome would be if NGOs and authorities can use the momentum here to leverage progress elsewhere.