Can new donor cash be made to work for smallholders? 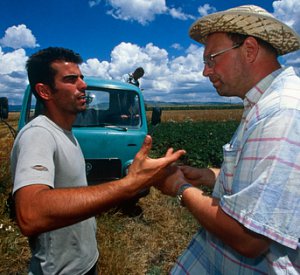 Trust is the essential ingredient

Recently announced $bn investments into smallholder agriculture are welcome, but the real challenge remains how to find partnership models that deliver

Big money is going into agriculture in developing countries. Governments, development banks, donor agencies and major private foundations are ploughing in cash in a bid to guarantee food security in traditionally challenged areas, and to boost the resilience of smallholders in the face of the ever-increasing impacts of climate change.

Sums being made available include $6.6bn through the United States Feed the Future programme and $24bn for African agricultural transformation through the African Development Bank. Private foundations that have made pledges include the Bill and Melinda Gates Foundation and the Rockefeller Foundation.

This money underpins strategies to increase the incomes of smallholders and to boost their productivity and improve distribution systems so that nutrition in developing countries improves overall. “Unprecedented” progress in these areas means that “for the first time in human history, the end of hunger, under-nutrition and extreme poverty is within our grasp,” according to a new report from Feed the Future.

It all sounds good. But the availability of heavyweight financial resources for agricultural development has created its own problem: how best to deploy the money at large scale so that an enduring transformation can be achieved.

But partnerships are not necessarily easy. There is still a “struggle to find the right model,” says Kavita Prakash-Mani, executive director of Grow Asia, which works on sustainable agriculture partnerships.

The key, she argues, is that there needs to be an “independent honest broker in the middle” who can represent the interests of smallholders and speak effectively to companies and development organisations.

But brokerage models are tricky to implement and have only been established to a limited extent so far. To manage the funds being put into sustainable agriculture, their capacity needs to be dramatically increased – Grow Asia, for example, has a full-time staff of just seven.

In addition, companies might struggle with the pre-competitive nature of such arrangements, including shared control and unpredictable outcomes – companies might put resources into a smallholder development project, for example, but not reap all the benefits if the smallholders have the flexibility to sell to multiple firms.

There might also be challenges in dealing with the authorities. A recent Oxfam briefing on maize markets in southern Africa, for example, notes there is mutual distrust between governments and traders at all levels. Because of the importance of maize as a staple in the region, it can in fact become a political tool; its supply and demand “manipulated to burnish political reputations and garner votes”. Authorities might resent any initiative that could be seen as undermining their control.

So, while big cash commitments for sustainable agricultural development in poor countries are going to bring development benefits, more money brings changing risks, inevitably, for big business, smallholders and their partners. As Peter Davis points out: “Investment on its own doesn’t solve the problem. It’s what we do with it that counts, and while progress is being made, we still don’t seem to have worked out yet that the right solutions are rarely the easy ones.”