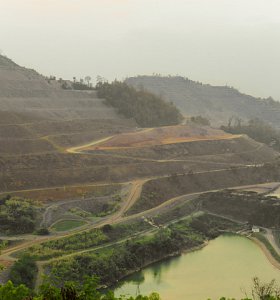 Even bigger impact than you thought

The deforestation consequences of ever-expanding agriculture is well understood. New research suggests that what is less well known is the impact from other industrial practices, including mining, particularly in the Amazon region.

In a push for development and growth, governments have been scrambling to reap the economic benefits of extracting large amounts of metal ores, with the deforestation associated with such development in areas of ancient virgin forest more serious than previous thinking suggested, according to a new study.

The research by the University of Vermont, published in Nature, suggests that mining-related forest loss in Brazil caused around 10% of all Amazon deforestation between 2005 and 2015, much higher than previous estimates. And the majority (90%) of this deforestation occurred outside the areas that had been granted a lease for mining by the Brazilian government. In fact, the deforestation that stemmed from the impacts of the mining activity was 12 times greater outside the mine-lease areas than within them, extending up to 70 kilometres beyond mine borders in some cases. In previous research the wider impacts of the mining activity had not been closely considered.
Substantial cause
What is now clearer than before is that mining now ranks as a substantial cause of Amazon forest loss.
Cattle ranching has been responsible for the greatest impact on deforestation in the Amazon, accounting for 60-70%, with other agriculture accounting for around 25%, logging less than 5% and mining, it was commonly accepted, only around 1%. That this may be as high as 10% “is alarming and warrants action”, according to Laura Sonter of the University of Vermont’s Gund Institute for Environment, a co-writer of the Nature paper.
There is also evidence of mining’s greater impact outside of Brazil, says Chris Meyer, senior manager at the Environmental Defense Fund. He points to the significant media coverage of areas such as Guyana, Suriname and Venezuela, where photos of mining damage “have been shocking not only environmentalists, but non-environmentalists for a while”.

Indirect impacts
Crucially, there are significant indirect impacts of mine expansion. These can be “complex and difficult to capture”, says Morgan Gillespy, director of forests at CDP. Large-scale mining operations in forest regions are frequently associated with infrastructure development that attracts migration. “Illegal logging and conversion of forest to agriculture are likely outcomes of greater access and more people in previously remote areas.”
The Nature paper lists land use displacement, urban expansion, development of commodity supply chains, and concerns over mine waste discharge and spills as the drivers for tree loss around mining facilities.

It is these indirect impacts on forests from newly established industrial operations that should cause most concern for companies with ambitious no-deforestation commitments. And it’s not just mining. Similar in scope and scale to legal mines, large dam projects also have “under-appreciated impacts,” adds Meyer. “The Brazilian mega-dam project Belo Monte is an unfortunate example of this.”

Any effort to slow deforestation demands an understanding of why trees are being cleared; therefore, the new research is welcome.

Companies can continue to build transparency into their supply chains, using tools such as CDP’s forests programme to gain better insight into their forest-related risks. Gillespy also wants to see more mining companies engage in deforestation-reduction initiatives, such as the New York Declaration on Forests – which thus far has not been endorsed by any mining company. That the sector has, potentially, more deforestation embedded than previously understood in its products will perhaps come as a surprise to many.
Some big companies are involved. Sonter and her colleagues list Carajás, the world’s largest iron ore operation, owned by the Brazilian company Vale, and Trombetas, Brazil’s largest bauxite producer, partly owned by Vale, Rio Tinto and others, as examples of concessions with indirect deforestation impacts in the Brazilian Amazon.

Tackling the impact of mining in the concession areas and beyond is not going to be easy, according to EDF’s Meyer, pointing out that in remote areas of the Amazon basin government doesn’t have a strong presence. What will be interesting, however, is to see how much the new evidence linking mining activities to greater deforestation sharpens the attention of forest NGOs, and of companies with metal ores in supply chains that now have significant deforestation risks.