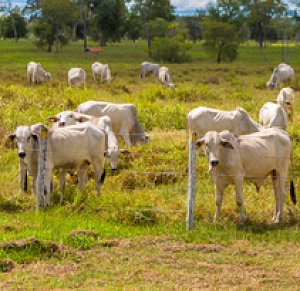 From trees to cows

Increasing demand is driving beef-sector growth in the Amazon and elsewhere – and a shift in market incentives, alongside technology and innovation, appear necessary to slow deforestation

Cattle ranching, to produce beef, is the biggest driver of deforestation, linked to more tree loss than soy, palm oil, or pulp and paper – the other major forest-risk commodities.
Cattle ranch expansion at the expense of trees and vegetation is most pronounced in the Brazilian Amazon forests and Cerrado grasslands, the Gran Chaco of Argentina and Paraguay, and parts of Colombia and Australia.

While the US produces the most beef, 12m tonnes or 19.6% of total global production in 2017, Brazil is second with 9.5m tonnes (15.4%) with Argentina, Colombia, Paraguay and Uruguay combined producing around half Brazil’s total combined, according to the US agriculture department.

And the National Wildlife Federation (NWF) says that in the past five years nearly 3.2m hectares has been cleared in the Brazilian Amazon, and over 4.3m ha has been cleared in the Cerrado – with up to 60-70% of these losses driven by cattle ranching. NWF estimates that up to a further 5.1m ha in the Amazon and 1.1m ha in the Cerrado could be cleared by 2030.

Elsewhere in Latin America, under current business-as-usual projections, it is estimated that a further 6-7m ha could be deforested or cleared in the Argentine and Paraguayan Chaco in the next decade, with much of this driven by cattle, especially in Paraguay.

It is the growth in demand, predominantly coming from the least developed countries across Asia and Africa, that continues to put pressure on beef production in Latin America. And there is big money involved. Brazil’s ranches, for example, contributed some US$123bn to the country’s economy in 2016, accounting for 7% of GDP. A fact no doubt front and centre of mind for the new Brazilian president, Jair Bolsonaro.

Already vocal in opposition to the terms of the Paris climate agreement, according to Clima e Sociedade, one of Brazil’s leading institutes promoting low carbon development, he also claims the Forest Code – the national law requiring landowners in the rainforest to maintain 80% of the territory they own as a reserve for native vegetation – is unnecessarily harming agricultural economics. And he wants to do something about it.

Most newly-deforested land tends to be first put into beef production. That is because it is the cheapest option – most cleared land is not ready for crops to be planted straight away, says Ruaraidh Petre, executive director of the Global Roundtable for Sustainable Beef (GRSB).

Land can double in value the moment the trees are removed, and typically cattle are raised for a few seasons before the land is sold on for commodity crops. “The beef industry in Brazil occupies 22m hectares less land now than it did in the 1990s. Medium and long term, beef will always be displaced by more profitable enterprises, like soy and palm,” Petre says.

But it’s the role of cattle ranching in the initial forest clearance that bumps up the sector’s climate change impact. “When you include emissions from deforestation and land-use change, the total footprint of cattle increases drastically,” says Simon Hall, manager for tropical forests and agriculture at NWF. Cattle reared on recently deforested land in the Brazilian Amazon can have an emissions footprint that is up to 25 times higher than cattle reared on established pasture in the same region.
Tech solutions

Technology and changing farming methods can, however, ease this pressure – by better use of already-cleared land. “Brazil has … done the most to tackle deforestation – and has certainly demonstrated that it is possible to decouple expansion of the beef industry from deforestation through intensification of pasture management,” Petre says.

A greater adoption of sustainable intensification practices and techniques – for example, using better grass mixtures, and installing fencing and paddocks for rotational grazing – will boost productivity and therefore reduce pressures to expand.
Soy itself, of course, is a major component, and deforestation risk, in many beef supply chains, as a fodder crop. This has been a focus of activist campaigning, not least Mighty Earth’s 2017 report criticising fast food chain Burger King for a lack of transparency over its supply chain deforestation risks.
Since Mighty Earth’s campaign, Burger King and other similar brands have made revised commitments on deforestation in their supply chains, including in relation to where soy in feedstock is sourced from.

As with other forest commodities, when high-profile developed economy brands do the right thing – to engage with ‘legal’ deforestation or avoid sourcing from an area altogether to remove the risk – it doesn’t mean the problem is solved. Demand from other markets, where expectations are lower, means unsustainable practices can continue unabated. Most of Brazil’s beef exports end up in markets such as Russia, China, Iran, Egypt, Saudi Arabia and Turkey, with EU exports amounting to less than 3% of the total, for example.

So which business are able to exert any real power to effect change in Brazil?
According to Petre, the most powerful companies in the Brazilian beef supply chain are the processors, including JBS, Marfrig and Minerva. “These three control more than half of beef supply in the country and 70% of supply from the Amazon. All are involved in the Brazilian Roundtable on Sustainable Livestock (GTPS). They could increase traceability in their supply chain, but it seems their clients are not pressuring very hard for them to do so,” he says.
The right incentives

While land owners have a legal right to convert some land – in Paraguay, for example, the government actively supports the conversion of the Chaco claiming that it is an economic imperative – there is little incentive to keep forests standing at all.
But it is in improving traceability and providing evidence that land has not been cleared or converted for agriculture that will have the biggest positive impact, according to Beatriz Domeniconi, executive coordinator at the GTPS.
She says Brazil’s Forest Code is the “most balanced mechanism to protect the environment” while ensuring there is an increase in productivity. But she argues that more is required. “If I’m a business choosing to leave a forest standing, I need an incentive – not just a payment, but a market mechanism that can value the forest and natural vegetation.” If the Amazon is important for everyone, it must be valued appropriately by consumers willing to pay more to reward producers behaving responsibly, she adds. This, of course, remains a major stumbling block – forest campaigners typically prefer to call on business to take the lead.

In terms of traceability, some have called for Brazil to follow Uruguay and the Republic of Ireland, which have established digital traceability systems to track livestock from birth to end of life and along supply chains. But with 220m animals in Brazil (compared, for example, to Ireland’s 7m), it is a big task.

Developed to meet EU demand for deforestation-free beef, Brazil’s own Bovine and Bubaline Identification and Certification System has struggled to gain users because most Brazilian beef is consumed in Brazil rather than exported.

Risks remain
Ultimately, economics and market forces will dictate the direction of the agribusiness sector – and the resulting ongoing deforestation risk to which beef-buying brands remain exposed.

The challenge remains that, for now while beef-producing countries continue to look to the sector for development, economic incentives and investment to make sure trees are left standing remain dwarfed by agricultural investments to prepare for the ongoing demand growth.
Brazil’s new political landscape could make things more challenging still, but any solution requires alignment with the expectations and priorities of the market, NWF’s Simon Hall argues. “Strong demand from international buyers of Brazilian beef for effective environmental and social governance would be a powerful market response to potential rollbacks in public policy.”