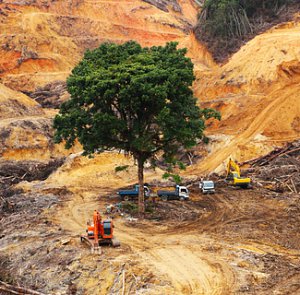 Lungs of the planet?

“Tropical forests used to absorb carbon. Now they emit as much as all US transit” – a standout headline as a new study published by Science magazine caused a bit of a media stir.
Once considered an all important carbon sink, the study is suggesting that tropical forests have reached a significant turning point.
Using satellite data to quantify net annual changes in the above-ground carbon density of tropical vegetation, scientists suggest that deforestation, drought and other “forest disturbance and degradation” have made tropical forests a net producer of carbon rather than acting as a sink.
In fact, the study says that every year, instead of absorbing carbon, the degraded tropics are actually producing more carbon – around 425 teragrams of carbon – than all of the greenhouse gases (GHG) produced by vehicles in the US.
An opportunity?

Scientist Alessandro Baccini, one of the study’s authors, has tried to put a positive spin on the development, saying, “what this study is telling us is that the forest is actually a great opportunity. Forests in the tropics are actually a source of carbon, meaning they are emitting more than removing, but you can change that.”

Putting an end to deforestation in the tropics could cut GHGs by around 862 teragrams of carbon, or 8% of annual global emissions. The study’s numbers suggest that even a slight improvement in the rate of tree loss could make a huge difference.

However, while there has perhaps been an element of media hyperbole on the Science study’s findings, this is the latest research that suggests tropical deforestation is not being reversed at anything like the rates required to have positive impact on climate change and other potential global environmental crises.

There is an urgent need to scale action faster. “Big companies can make a difference in their own businesses and because many of them are so large, their impact can extend beyond their own supply chains. But they alone can’t turn the tide,” argues Scott Poynton, founder of TFT.
Poynton says that companies have got to step up their activity. He argues that some are “hiding behind group-wide ‘no deforestation’ commitments such as that developed by the Consumer Goods Forum”. And some companies have made such commitments but aren’t implementing them strongly enough, he says.
There are others, of course, who have made a commitment and are doing everything they can to play a leading role. “Sadly, there are not enough in the latter group – the only group that is really having any impact.”
In research published in March 2017, Supply Change highlights 447 companies with 760 commitments to curb deforestation in supply chains. Transparency around those corporate commitments is improving – with publicly available data on progress available on 36% in 2016 and up to 51% of them in 2017, Supply Change reports.

But, as Poynton says: “Ultimately, we need everyone in the supply chain speaking with their suppliers and pushing, urging and incentivising them to conserve, or even better, to rehabilitate forests.” Coalitions of progressive companies, plus stronger government regulation, can encourage the laggards to implement tough procurement policies. “But I don’t see that happening any time soon.”

In Indonesia, for example, despite a lot of effort and attention, while there have been some positive moves in the palm oil sector for example, through the RSPO and other action, broader progress on deforestation, peatland restoration and forest rehabilitation rates has been slow. WWF’s and Greenpeace’s public move to stop collaborating with Indonesian pulp and paper giant APRIL in December 2016 over concerns about transparency is typical of the frustrations many NGOs have at lack of progress.

Collaborative efforts such as that between NGOs and companies to rally around the high carbon stock approach to protecting forests and restoring peatlands can have a positive effect, but need more impetus to be effective. There are other tools that can help companies implement targets, such as the Trase mapping platform that tracks where commodities come from, the end buyer and the different actors along the supply chain, transparently linking to deforestation data.

Ultimately, progressive companies need to continue to commit the necessary resources to implement targets, and to push governments for a legislative environment that helps enable them to do so. Perhaps then there’s a way to take advantage of the carbon opportunity from tropical forests that Alessandro Baccini suggests is still possible.