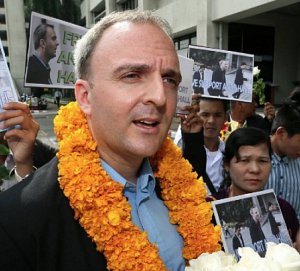 The shock conviction of human rights campaigner Andy Hall in Thailand seems to be part of a crackdown on free speech in the country. But what does it mean for companies sourcing from Thai suppliers?

The court judged Hall to have committed criminal defamation because he contributed to a report by Finnish corporate responsibility watchdog Finnwatch, which found malpractice at a Thai supplier to Finnish supermarket chains. Ahead of the verdict, Hall and Finnwatch were confident of acquittal.

The surprise judgement was “a real shock for everyone” and an “attack on freedom of expression,” Hall says.

‘Scared to silence’
Sonja Vartiala, executive director of Finnwatch, makes the point that Hall should not have been in the firing line at all. The report at the centre of the case “was authored and published by Finnwatch; we take full responsibility for it”. The verdict make it more likely that, in Thailand, “many other human rights defenders and victims of company abuse will be scared to silence”.
In ruling against Hall, the Thai court found in favour of a Thai company, Natural Fruit Co, which had been criticised in the Finnwatch report for worker rights violations.
Other companies covered by the report responded by promising to make improvements, but Natural Fruit decided to go on the offensive – and to hit hard. The company is also seeking civil damages against Hall. Finnwatch says that Natural Fruit is owned by Wirat Piyapornpaiboon, a former politician and president of the Thai Pineapple Industry Association. Following the guilty verdict, Piyapornpaiboon said that “no foreigner should think they have power above Thai sovereignty,” (as reported in the Bangkok Post).
Supply concerns
For companies that buy from Thai suppliers, this raises some obvious concerns.

If suppliers start to claim that their “sovereignty” is compromised by any oversight intended to eradicate human rights infringements, how will companies at the top of the value chain be able to guard against abuses? Consumers want to know that they are not contributing to exploitation, and it could become harder for retailers to offer those assurances for products sourced from Thailand.
The Foreign Trade Association, which represents retailers, has reached a similar conclusion. In the wake of the conviction of Hall, it said that Thailand’s lack of alignment of domestic legislation with international standards and law enforcement in the key areas such as illegal fishing and the protection of the environment, are “making sourcing operations of European companies increasingly risky”.
Maurizio Bussi, the International Labour Organisation’s country director for Thailand, says the mistreatment of workers in Thailand highlighted by Finnwatch “cuts across industries,” and the conviction of Hall could “undermine the capacity and willingness of researchers, rights groups and migrants themselves from bringing such problems to light”.

Speaking to Innovation Forum a few weeks before the verdict, Hall had made the point that many Thai companies are committed to meeting international labour standards as part of their business sustainability strategies.

But others reject criticism, resent any oversight of their practices and are prepared to go to extremes against rights campaigners. “If I wasn’t a foreigner I would have been dead many years ago,” says Hall, a long-term resident of Thailand, now.
The verdict against Hall could have emboldened the retrograde forces in Thai business. Companies that purchase from Thai suppliers must inevitably “weigh up the risks” of continuing to source from there, Hall says.
Join Andy Hall at Innovation Forum's business and human rights confernence in London on 24th-25th October.