Why ‘We Are Still In’ coalitions can drive sustainable business 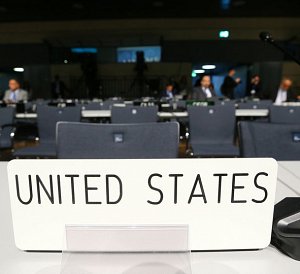 Is the subnational group reinforcing US commitment to climate action – whatever the current administration’s view – indicative of a new trend?

During the negotiations at the UN climate change meeting in Bonn, one of the favourite games was watching which ministers from governments around the world would turn up, and who would play the biggest role in helping keep the Paris deal on tough pledges to cut emissions moving forward.
A notable dissenter, of course, was the US administration. Rather than being led by a senior cabinet minister, as most other delegations have been, the American team was headed by an under-secretary from the US state department.
Other governments have used the Paris agreement to help establish ambitious plans. France has pledged to ban all petrol and diesel vehicles by 2040. Donald Trump, on the other hand, intends to take his nation out of the deal which he says “undermines” the US economy, putting it at a “permanent disadvantage”. At the COP23 meeting in Bonn the US delegation hosted a forum to discuss the merits of coal and nuclear power (prompting Michael Bloomberg to suggest this was like promoting tobacco at a cancer conference).
Still in?

Many of the world’s biggest companies, particularly those based in the US, as well as cities and states, however, have rallied in defence of strong climate action.
We Are Still In, a coalition of 2,500 US states, businesses, city halls and colleges – representing some $6.2tn of the US economy – has been working hard to prove the value of upholding the Paris deal, regardless of the federal government’s position.

Representing “subnational” leaders, the group – coordinated by the likes of the Ceres, CDP, WWF and the B Team – offered a strong voice in Bonn.

Lou Leonard, WWF’s senior vice president, climate change, points out that if these leaders who’ve pledged support for the Paris Agreement were a nation, “they would be the third largest economy in the world”. Leonard says that there is significant untapped potential for these subnational leaders to do even more, for example “to move toward 100% renewable energy, advance electric vehicles and optimise building efficiency”.
Corporate clout

Some leading US companies including Mars, Walmart and Coca-Cola had a big presence in Bonn reinforcing that there are non-state actors in the US totally committed to the Paris Agreement. Mars’s new $1bn sustainability plan, for example, will see the food business aim to cut the carbon footprint of its entire value chain – from farms to the customers – by two-thirds by 2050.

Ashley Allen, senior manager for sustainability at Mars says that the We Are Still In coalition is a demonstration of “commitment to climate action”. Mars is, she says, “focused on doing what science says is necessary for our business to prosper” while, at the same time, “unlocking systemic changes that benefit people and the planet”.

Other big players are also out to prove it is possible to drastically cut GHG emissions while prospering. Apple, Autodesk, Facebook and Google have all set goals to become 100% powered by clean energy, for example.

But smaller firms like Fetzer Vineyards, in northern California, are proving effective subnationals too; it has just received a UN award for innovation, becoming the first American winery to reach carbon neutrality. Meanwhile, the state of California itself may use 50% renewable electricity by 2020, a decade ahead of schedule.

Being able to align with the targets laid out by the UN Sustainable Development Goals – which not only include GHG emissions reduction, but also goals to source more sustainably and eradicate global poverty – is proving useful. These help foster best practice and go beyond compliance, especially for procurement teams facing poor governance structures in many developing countries. The Science Based Targets Initiative is also proving useful in encouraging an impressive number of companies to adopt emission reduction targets that align with the best available science, going well beyond goals that might otherwise have been set internally.

For now, whether the efforts of new coalitions such as the subnational groups are enough to withstand staunch defensiveness by government remains an open question. But buoyed by collective action and increased unity in dealing with climate change, companies can be more confident that they won’t be walking alone.