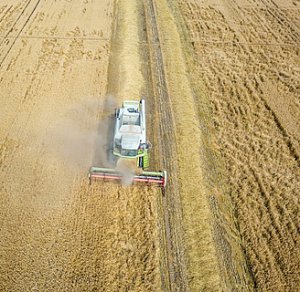 We need to make more from less

While need for ever-greater innovation to meet agriculture’s climate change targets is stark, decoupling what we produce and its emissions is possible

The World Bank’s decision to double the amount of cash it will invest in climate action projects was announced at the United Nations COP 24 meeting. It will inject $200bn over the next five years to help the worst-affected countries prepare for and deal with the impacts of climate change – a doubling of the promised investment put in place after the landmark Paris agreement of 2015.

While the details of how this money will be distributed remain sketchy, much of this cash is earmarked for ‘smart agriculture’ projects that will help farmers better adapt to current and likely future weather changes and protect food production in the most vulnerable countries. Agriculture has had a generally higher profile in the COP process since the 2017 COP23 meeting in Bonn, for example through the Koronivia joint work on agriculture.
While agriculture is at the mercy of climate impacts, it is also plays a significant role in creating the problem in the first place. The total greenhouse gas emissions coming from global livestock stands at 7.1 gigatonnes of CO2 equivalent a year, representing 14.5% of all GHGs.
‘The mother of all challenges’

The intertwining between agriculture processes, how they affect climate change and how farmers cope with the impacts, means that reforming the agricultural sector is a pressing concern, particularly if we are to keep climate change to the limits science says we can cope with. “Food is the mother of all sustainability challenges,” says Janet Ranganathan, vice president for science and research at the World Resources Institute. Along with GHGs, farming also contributes nitrogen pollution, deforestation, biodiversity loss and water use. “We can’t get below 2C without major changes to this system,” Ranganathan says.
In a new report that was launched at COP24, WRI finds that on a ‘business as usual basis’ feeding 10 billion people sustainably by 2050 will require 56% more food and 1.4bn more acres of land – an area twice the size of India. The data also suggests that agricultural emissions are set to rise to 15 gigatonnes a year by the middle of the century. But sticking to the Paris agreement means that the industry’s emissions need to fall to 4 gigatonnes a year – a 67% reduction on 2010 figures.
The required decoupling of production and emissions is immense. The myriad environmental and management factors at play – all of which include their own variables and are at the same time inter-related – makes tracking, measuring and quantifying GHG changes based on land management practices, both seasonally and over time, a real challenge. For example, cover crops can sequester additional carbon, yet they may also reduce yields slightly leading to a higher GHG footprint for the grain.

The other significant part of the challenge is the economic impact according to Jill Wheeler, head of sustainable productivity for North America at Syngenta.

She argues that food is produced in a system, so “to truly address challenges, we need a systemic approach, and that involves ‘skin in the game’ from all players”. Wheeler points out that it’s unclear if all players will be willing to share in the added costs of this challenge, or how equitably those costs will be shared.

Understandably, concerns as to how developing countries will be able to access the right technology, build extra capacity and finance sustainable agriculture continued to be a significant part of the conversation at COP24.

Right now, environmental campaigners are keen to put the onus on big food brands to take a lead, especially when the top five meat and dairy companies combined are emitting more GHGs than ExxonMobil, Shell or BP.

However, some companies, such as Tyson Foods, have set bold targets. Tyson’s science-based GHG reduction target of 30% by 2030 (from a 2016 baseline) includes emissions from its direct operations as well as its entire value chain – including everything from the grain that is fed to livestock to the energy used to sell its protein products in grocery stores.
A new tool launched by US industry coalition Ceres is designed to help other companies follow suit in disclosing and mitigating supply chain emissions. The scope 3 (ie supply chain) emissions of 15 big food companies that disclosed in 2017 amounted to 629.9m tonnes of CO2. And these indirect emissions accounted for 85% of their total carbon footprints.

According to Ceres data, less than a third of the 50 biggest food and drink companies in the US and Canada publicly disclose emissions from agricultural production. Only 30 of these have company-specific GHG reduction goals for their own operations – and of these, only half report scope 3 emissions, with just eight possessing explicit targets to reduce these emissions.

That needs to change, says Kevin Rabinovitch, global vice president for sustainability at Mars – a company with 75% of its full value chain emissions coming from agriculture and land use. “Any food and beverage company that takes climate action seriously must set meaningful targets to reduce emissions from agricultural production,” he says.
The deforestation factor
Central to progress will be changes in land-use and work to stop deforestation – which, to date, has not had GHG reduction front of mind, rather other outcomes such as biodiversity loss, says David Cleary, director of agriculture at The Nature Conservancy.

The good news, he argues, is that there is a lot of low hanging fruit in reducing GHG emission through more targeted use of fertiliser and a range of soil management practices that have no impact on yields and productivity, and in some cases increase them. Cleary says that “there are win-wins out there, and a scaling mechanism to hand through supply chain initiatives, but there needs to be a supportive policy framework and extension support to farmers as well”. But, he argues, we are still a long way from where we need to be, given the urgency of the problem.

There are examples of so-called smart agricultural practices having a big impact.

In New Zealand, the number of sheep being farmed has dropped by 53%, while production has only dropped 8%, cutting emissions from the national sheep flock by around 23%. This has been achieved through the use of better genetics, improved soil fertility and soil management, a focus on farmer training to improve farm management skills and the use of data and technology to improve decision making.

The New Zealand state-of-the-art GHG measurement centre has been crucial too. And the technology that enables smarter farming can be simple, such as a mobile phone delivering advice to help a farmer grow food more efficiently.
Wheeler says that as a system, agriculture will need to “work closely with other segments of society”, pointing to gene editing as a good example of how different players, including consumers, must find common ground. She argues that science has the ability to seek powerful, scalable solutions to challenges in nutrient management and water use. “However, if society decides that this science requires a heavy degree of regulatory oversight, those solutions are far less likely to be developed.”
Radical solutions are necessary. Clearly agriculture alone cannot solve climate change – there is an obvious need for continued sharing of knowledge, insights and solutions across sectors. But the daunting prospect of feeding 10 billion by 2050 means that continued investment – from the World Bank and elsewhere – in smart agricultural innovations will be necessary to meet this need while controlling climate impacts.

The future for agriculture and food production will be debated at two Innovation Forum conferences in spring 2019. Join industry leaders from the likes of Unilever, Sime Darby, Nestlé, Mondelez, PepsiCo and Kellogg in Chicago in May and in London in June.