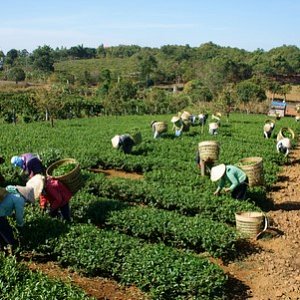 The potential of smallholder farmers is being recognised by big brands

Globally, more than 500 million smallholder farmers manage just 12% of agricultural land. Yet they produce more than 80% of the world’s food (in value terms), supporting the livelihood and wellbeing of around two billion people.

Managing very small pockets of land – in Bangladesh, for example, the average size of a smallholding is around half a hectare – the productivity, health, wellbeing and output of smallholder farmers offer the foundations for many of the products so important in the developed world, from coffee and tea, to cocoa, soy and palm oil.
In sustaining a plethora of sectors, commodities and companies, they are an incredibly important group. It’s a view shared by the United Nations Conference on Trade and Development (UNCTAD). Its latest Commodities and Development Report 2015 says smallholder farmers deserve more attention from policymakers to unleash their full business potential.

Tough climate
Smallholder farmers are up against it. In the face of political unrest, poverty and erratic weather patterns caused by a changing climate, the number of environmental, social and economic hurdles they must jump just gets bigger.
As UNCTAD argues, global poverty affects smallholders disproportionately and so achieving poverty reduction goals will “require taking a fresh look at how policies must be designed and coordinated” so as to cater to the needs of the smallholder farmer.

As more and more corporates turn their attention to what’s happening along the value chain of their most precious products and services, businesses are slowly waking up to the fact that, as a backbone to so much of what’s important to shareholder returns, smallholder farmers need a lot more support.

Whether it is to protect the supply of commodities, reduce the carbon impact of suppliers (which is suddenly properly en vogue in the wake of the Paris climate agreement), or to boost brand image, taking action to unlock the potential of smallholder farmers increasingly makes commercial sense.
The good news is: there’s loads of potential to unlock. Smallholdings are usually a family affair, run in a fairly rudimentary and inefficient way. A small improvement to the performance of 100 farms would have a huge overall impact.

The bad news is: it’s tough. The large majority of smallholder farmers operate on their own, making them really hard to reach, let alone help and engage in conversation about best practice.

Finance the key
More and more companies get it right with the development of new financing mechanisms to help farmers plan for the future, giving farmers training to boost productivity and improving smallholder access to market to get better prices for their crops. The work of Nestlé in cocoa, tea and coffee (working with NGOs such as TechnoServe), as well as John Lewis in cotton (working with CottonConnect), are good examples.

There is still so much that can be done and, so far, too many businesses have been ignoring this increasingly vulnerable tentacle of their supply chains.

The direction of travel is towards engaging with smallholders though. Maybe 2016 will be the year that smallholder farmers really get the attention – and support – they need to build resilience in the supply chains of big corporates for the long term.

If you've any comments, do get in touch at [email protected]