Why business must make climate its business now 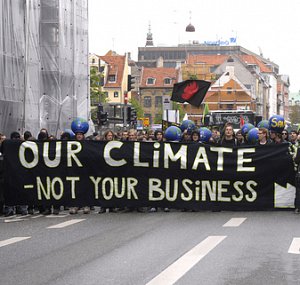 Who's going to be on the march?

It's in everyone’s interest for companies to lead the drive towards a low carbon economy. Paul Hohnen explains why

There are lots of good reasons why companies now need to get very serious about climate change. And by “very serious”, I mean intervening more directly in politics. Calling for a price on carbon; demanding incentives to make the necessary transition to renewable energy; speaking out about the unacceptable consequences of failure.
Let’s look at some of these.

Firstly, at the global level, it looks increasingly clear that there will soon be an “Ah ha!” moment when the political penny drops that climate change is actually real, here and very ominous.

That will quickly become an “Uh oh!” moment, and finally put climate change in the category of national or global emergency, requiring a “to hell with markets, debt and austerity” response. This has been done in times of war. For example: over 40% of US GDP was spent on defence during the second world war. It is more than likely it will be done again, once self-defence thinking kicks in.

There could be several triggers for this realisation.

It could be yet another dire warning, such as the recent report from the IPCC calling for climate change to be kept within 1.5C of pre-industrial times.

It could equally be yet another extreme climate event, such as a Category 5 tropical storm hitting Florida, Shanghai or Mumbai. Or a series of disastrous harvests across Asia or Africa due to floods or drought and the waves of refugees these will cause.
Policy responses

Three broad policy response options will then be on the table.

The nation-based “bunker strategy” will be a strong contender. Think of Italian city states in the 14th and 15th centuries. Walled cities on the hilltops. Protecting some and excluding others. Foreign investment will slow, as money is withdrawn to protect the nation state. Wars and competition for resources are on the cards.
More logical – but less popular in some quarters – will be a more coordinated but vastly more serious international response, such as that advocated by the UN. Addressing the underlying causes and sharing responsibility (and funding) for emissions reductions and adaptation measures.

The third option will be more of the same: a “muddle through” response. Well intentioned but ultimately insufficient action, based on the scientifically unsupported notion that some countries will suffer less than others. As climate impacts play out, in an inter-connected global economy, there will be no winners.

Investors and business know that only the more international response is likely to be business friendly, based as it will be on massively-increased investment in climate friendly technologies and innovation, increased trade in related goods and services. (Think of the second world war, when the car companies profitably made tanks instead…).

There would be more and better linked wind parks, solar farms and connecting grids, with more resource and energy efficient – and electric powered – everything.

The risks…
On the other hand, at the national or more local level, the “Uh oh” moment is likely to see some or all of the following very business unfriendly trends.

And so on. Indeed, some of these are already happening.

Unless credible response measures are put in place, the Global Climate Crisis seems set to undermine investor, business and consumer confidence on an unprecedented scale, as well as further erode trust in governments.

This is in no-one’s interest. As Stephen Green, former chair of HSBC once remarked, climate change will be the ultimate test of how well capitalism works. Now’s the time for all business to help drive the needed and urgent transition to a vibrant, low/no carbon economy.
Paul Hohnen was an associate fellow of the Royal Institute for International Affairs (Chatham House) from 2005-2018 and is an independent sustainability consultant. The views expressed are his own.